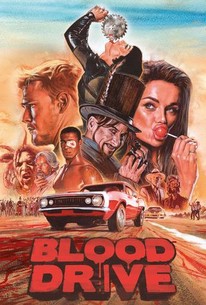 This drama series is set in a near-apocalyptic future where a massive earthquake has split the United States apart. As a result, water is scarce and gasoline prohibitively expensive. A police officer, Arthur Bailey (Alan Ritchson), is forced to partner up with Grace D'Argento (Christina Ochoa), a femme fatale with her own agenda. Together, they participate in a death race in which the cars run on human blood. As they make their way through the race, they find out that the corporation organizing the event has been involved in their own pasts as well.

Darren Kent
as The Scholar

Andrew Hall
as The Gentleman

The cars run on human blood; the series runs on a wicked sense of humor.

Blood Drive, SyFy's new series, isn't a television show so much as a mashup of everything that's ever offended the Parents Television Council.

Officially, Syfy isn't subject to FCC rules, but what this weird-ass show gets away with goes well beyond anything you might have ever seen before.

While it is no heir to what Rodriguez and Tarantino did, Blood Drive is an indulgent Grindhouse for all the modern direct-to-video goofiness and weirdness you can only watch at home now anyway.

The acting on the Syfy show is very dicey. The romance plots are unconvincing and the story's fascination with the moral struggles of good-guy cop Arthur Bailey is unaccountable and misguided.

It's go-for-broke enjoyable mayhem for those who like that sort of thing. Just be sure to wait to watch until the kids are in bed.

Turn it on for a satisfying snicker as we all pick up our briefcases and beat each other to death.

Between the barebones plot, the wooden main characters and the lack of good satire, there's just not enough here to really justify the 13-episode treatment.

There's plenty of cinema du carsploitation fun to be had with this gonzo drive-in throwback involving killer vehicles gobbling up unsuspecting victims.

There are no featured audience reviews yet. Click the link below to see what others say about Blood Drive: Season 1!