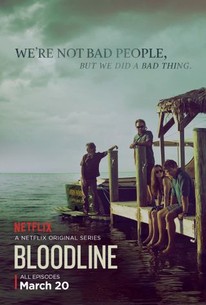 Critics Consensus: While Bloodline's tricky timeline detracts from the potency of the story and its characters, the show remains an addictive, tightly drawn brainteaser framed on a believable canvas.

Critic Consensus: While Bloodline's tricky timeline detracts from the potency of the story and its characters, the show remains an addictive, tightly drawn brainteaser framed on a believable canvas.

Season 1 of this drama series about a wealthy family who run a successful beachside hotel in the Florida Keys begins as Danny Rayburn (Ben Mendelsohn), the prodigal oldest brother and black sheep of the clan, shows up . The Rayburns are forced to decide Danny's role in the family when his reappearance triggers a return to his long history of illicit behavior and illegal business ventures . John Rayburn (Kyle Chandler), the deputy sheriff of the county, and his younger siblings, Meg and Kevin (Linda Cardellini, Norbert Leo Butz), attempt to keep their brother under control while preventing dark secrets from the family's past from being revealed. The cast also features Sissy Spacek, Sam Shepard and Jacinda Barrett.

13 Reasons Why and 10 More Shows With Sophomore Slumps
Critics Consensus: Furious 7 Is Certified Fresh
Bob Odendirk and David Cross Are Reuniting for a New Netflix Comedy

Chandler's John Rayburn may not be able to see what's coming next, but binge-happy Netflix subscribers certainly can. A lighter touch is needed when the space between episodes is seven seconds, not seven days.

A certain amount of trust has to go with Bloodline. The team behind it is first-rate, the actors too. And because this is a project designed for binge-watching, maybe the pace will work in its favor.

The premiere left me a little concerned that the overheated dialogue and drawn-out mysteries of Bloodline would frustrate me too much in the long run. By the end of the third episode, I would have dropped my plans for the day to watch at least one more.

Rarely do we escape the distinctly depressed insular universe of the Reynolds' family, making for an experience both intoxicating and claustrophobic.

That noir family dynamic is what makes this show tick. The flashbacks smartly give the audience access to those magic mirrors. We get to understand what the Rayburns see when they look at each other. And like them, we have no idea who can we trust.

Buoyed by a bravura performance from Australian Ben Mendelsohn... as prodigal son Danny Rayburn, Bloodline is an absorbing, fractious family drama that captivates despite giving away Season 1's major development in the very first hour.

With Bloodline there is an emotional ups and downs from the desire to see the next chapter. [Full Review in Spanish]

Six episodes in, with the atmosphere swinging between portentous and over-pumped, the suspicion that you are watching a guilty pleasure dressed up as something more sophisticated is hard to dispel.

That's what makes Bloodline special. Storylines are introduced gradually, over the course of several episodes, and left to simmer on their own until they reach a boiling point.

With its dark ambience, stony performances and deliberate pace, Bloodline has a dastardly reticence to it that may turn off viewers. But once the series starts to get its claws into you, a long night of binge-watching seems inevitable.

Isaac Feldberg
We Got This Covered
View All Critic Reviews (48)

Bloodline focuses on a simple premise of a family's dark past while each member navigates through a tragic accident of the death of the father. Everyone began mistrusting each other and more drama was ensured. The acting was superb but the characters were extremely unlikeable. The pace was also too slow and tangled with meaningless sub-plots.