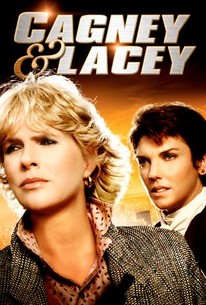 Tough female cops fight crime on the streets of New York City while battling chauvinism in the workplace. When the going gets tough they seek refuge in the ladies' room, where only viewers can see them let down their guards and show their vulnerability. For the depth they brought to the roles of best friends and trusted partners, Sharon Gless (Cagney) and Tyne Daly (Lacey) collected seven Emmys between them, saw the show revived from cancellation twice and starred in four made-for-TV movies.

Witness to an Incident One of Our Own The Beauty Burglars High Steel Hotline Internal Affairs Mr. Lonelyhearts Conduct Unbecoming I'll Be Home for Christmas Recreational Use

Cagney & Lacey gives us two strong, credible female lead characters, a commodity in short supply on TV. In fact, with Daly and Gloss performing capably, the hour is at its best when the two women are alone together on the screen.