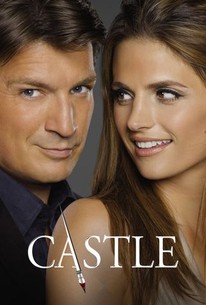 Critics Consensus: Castle's leads are certainly likable and fun to watch, but there's precious little beyond the banter to keep the series compelling.

Critic Consensus: Castle's leads are certainly likable and fun to watch, but there's precious little beyond the banter to keep the series compelling.

In the first series of this crime drama, successful murder-mystery writer Richard Castle (Nathan Fillion) is asked to consult with the New York City police about a serial-killer case in which the murderer is reenacting scenes from Castle's books. He agrees, and he shares his insight with Det. Kate Beckett (Stana Katic), the lead detective on the case. After the case is solved, Castle uses his friendship with the mayor to continue working with Beckett's team on additional cases. The benefits are mutual: His skills will help the police, and he will get to do research his next series of books centering on Det. Nikki Heat, a female protagonist inspired by Beckett. Beckett objects to the character's name and disapproves of the way Castle doesn't follow police protocol, but she realizes she's in no position to question the mayor's decision.

Bailey Chase
as Will Sorenson

James Patterson
as Himself

Stephen J. Cannell
as Himself

David A. Kimball
as Mr. Kendall

With pretty faces and intriguing cases, it washes over you like warm water, creating a soothing cocoon of banality.

"Castle," for all its predictability -- and its unfortunately timed resemblance to hits like "The Mentalist" -- isn't without its charms, chief among them Nathan Fillion.

[Nathan] Fillion pushes so hard as fun-loving Castle that the character irritates.

With Moonlighting and Murder, She Wrote as the dominant influences, Castle is predisposed to be formulaic and stale.

Castle could be all kinds of fun.

"Castle" still isn't the greatest or the most creative detective series out there, but it's definitely a solid role for [Nathan] Fillion.

[Nathan] Fillion remains a very appealing leading man, and "Castle" is good enough that the charm of the characters and the actors who play them looks like it's enough to carry the show.

It's a show that is easy on the eyes and on the brain.

The flirty banter of Castle's main characters and the show's lighthearted tone provide a welcome change of pace for crime-show lovers.