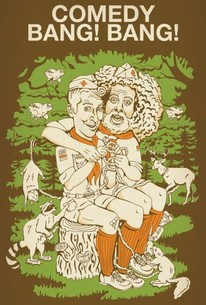 Season 4 of this laugh-filled series that offers takeoffs on late-night talk shows and features celebrity guests, comedy sketches, film shorts and games doubled the amount of episodes as in previous seasons. With 40 different shows and 40 different guests, the Bang Bang gang was hopping. Another monumental event on the series came about halfway through its 2015 run when host Scott Aukerman's original sidekick and music director Reggie Watts left the show and was replaced by Kid Cudi. The seasnon kicked off with a visit from Ty Burrell Wearing a Chambray Shirt and Clear Frame Glasses (that was the episode title). Among the other big-name, sartoriallly resplendent stars dropping in were Jesse Tyler Ferguson, Joseph Gordon-Levitt, Weird Al Yankovic, Carly Rae Jepsen, Judd Apatow, A$AP Rocky, Josh Groban and Simon Helberg.

There are no featured audience reviews yet. Click the link below to see what others say about Comedy Bang! Bang!: Season 4!