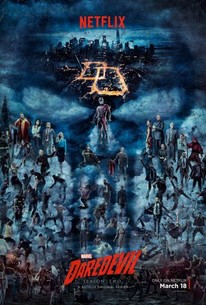 Critics Consensus: Bolstered by some impressive action, Daredevil keeps its footing in season two, even if its new adversaries can't quite fill the void left by Wilson Fisk.

Critic Consensus: Bolstered by some impressive action, Daredevil keeps its footing in season two, even if its new adversaries can't quite fill the void left by Wilson Fisk.

After defeating Fisk and his empire, Matt Murdock patrols the streets at night as the vigilante hero, Daredevil. However, just as he stands at his tallest, the arrival of a new threat, driven by the same impulse for justice but warped by need for violent vengeance, enters the city in the shape of Frank Castle. However, the arrival of a face from Matt's past also signals an even darker, ancient threat emerging to claim Hell's Kitchen.

Daredevil is about a man with a savior complex who wrestles with the morality of violence, which the show portrays in gruesome, prolonged, visceral ways.

Jon Bernthal is the perfect Punisher because there is zero fun in his performance.

This second season doesn't at all feel like a waste of time. But here at the end, it doesn't feel necessary for there to be a third season.

Once again, bone-crunching violence, and a compelling hero.

Everything that makes the show what it is has been condensed into one episode, right down to the reveal of a mysterious new villain and bone crushing fight scene finale. This year the show won't be hailed as a masterpiece, but don't doubt it.

'Daredevil' is dark, violent, adult and not complacent, it is about much closer issues. [Full Review in Spanish]

I was practically convulsing with fanboy glee. It's one of those classic hero-vs-hero face-offs that comics fans can't help but love.

The vibrancy, sense of fun and excitement and the excellent character work (supported by yet more home run casting from Marvel) rejuvenated a hero who seemed to be lost in the mire of grim and grit.

As a whole, the season has been an interesting, somewhat nonsensical ride, punctuated by great moments.

Overall, the season felt like an improvement over the first, but there's still room to grow.

Daredevil's second season begins to falter to a small degree in its last few episodes. However, up until that point it is transcendent television. And afterwards? It's still pretty great. Special props to Bernthal's Punisher who blew expectations out of the water.

Daredevil Season 2 continues to boast more of its emphatic action and also its menacing & brutal sequences. The addition of new cast members (Bernthal & Yung) provide for a fresh and darkening portrayal of their respective characters, even if the subplots become difficult to pinpoint at times. Regardless, the second season continues its rise with its pulse-pounding storytelling, action and drama; making for a more-than-satisfying follow-up on the acclaimed Netflix-original. 4.5/5

Season 2 of Netflix's Daredevil gets even more gritty and action-packed with the introduction of Elektra and the Punisher. When former Iraq veteran Frank Castle starts a war with the Irish mob to avenge the deaths of his family Daredevil attempts to stop the bloodshed by capturing Castle; but things get more complicated when, as Matt Murdock, he takes Castle's case to prevent him from getting the death penalty and uncovers a government conspiracy. Meanwhile Matt's former girlfriend Elektra comes to town and stirs up some trouble of her own. Both Jon Bernthal and Elodie Yong give excellent performances and come to own their characters. And the writing and directing is really intense, and avoids a lot of typical superhero tropes. The storytelling is also incredibly well-done, tightly weaving multiple story threads throughout the season. Exciting and full of thrills, Season 2 of Daredevil gets darker and more compelling.

Following the incredible standards set by the first season of this Netflix series, "Daredevil: Season 2" did not have to be a better season, but it definitely had a lot of pressure and needed to continue on a high note. Does it do that? Absolutely! Charlie Cox, Elden Henson, and Deborah Ann Woll all return as the founders of Nelson and Murdock, and while things have been slow for their firm, things are going to get even worse for them. With newcomer to the series, Jon Bernthal, the character of Frank Castle (AKA The Punisher) comes into play right off the bat in season one. With a troubled past and seeking vengeance on anyone who has done wrong in the city, it seems as though this "Punisher" has similar ideals. Elektra, as well as some returning characters, return as well, making for a very story-filled season. Although it is chalk-filled with characters and storylines, that may be the one big fault that people will find as well. This season, without giving anything away, has returning characters from the past, on top of the new characters who have been spilling their backstories. From courtroom scenes, to the mafia, to romance, this season does not let up, which to me was a bit much by the end. In many ways, this is a superior season to it's predecessor, but the fact that it deals with so many plots kind of bogs it down for me at least. The Punisher and Elektra are the two most interesting characters here, but giving Matt a love interest definitely takes away from that. By the end of the season, it almost felt like it shared a few of the issues that "Avengers: Age of Ultron" had. Having cameos from the show "Jessica Jones," in order to set up the future Netflix/Marvel universe, hiding Easter Eggs that could possibly connect this show to the MCU, and actually using all of the superhero names instead of doing a clever job of hiding it. This show does it much better I will say, but it definitely felt the weight and pressure of pulling it all off. Out of the 13, there are roughly about 11 amazing episodes, and 2 very enjoyable ones that felt padded out. Once again, I loved the cast, loved the characters, the direction, and the cinematography, but the writing felt a little sped up this time around. That was not a bad thing, this season just was not as strong as a whole for me, as the first. Still, this is damn fine television and Marvel/Netflix should be proud of this season.