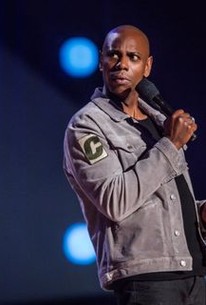 Critics Consensus: Dave Chappelle doubles down on controversial opinions that will strike many as more mean-spirited than funny, but the comedian's crack timing and onstage charisma remain intact.

Critic Consensus: Dave Chappelle doubles down on controversial opinions that will strike many as more mean-spirited than funny, but the comedian's crack timing and onstage charisma remain intact.

What to Watch With Watchmen and Seven Seconds Star Regina King

Are these specials funny? Sure. Sometimes. Are they insightful? Sure. Sometimes. Did I enjoy watching them? No, I did not. And Dave Chappelle has made it very clear that not enjoying any portion of his work makes me a humorless wimp.

He takes us to the depths of absurdity, walks hand in hand with his offensive nature, and speaks on the knowledge and wisdom we can see in it.

They're good. Of course they're good. Despite all the public discourse, I don't think Chappelle's talent was ever in question. We know the dude can put together a solid special, and these two might be his best yet.

"Comedy is saying mean things," is how Chappelle kicked off his latest special. It's a bummer that Chappelle now seems to think it ends there.

If Equanimity is his definitive statement on 2017, his year-in-review comedy party, then Dave Chappelle: The Bird Revelation is the afterparty. The postscript. Like any great afterparty, it's an intimate affair.

Does all this sound awfully heavy for a couple of comedy specials? You bet, and it just makes things more interesting. Chappelle is also just flat-out funny.

Humor, church and storytelling have numbed the pain of oppression for generations of black people in America, and if you've spent time in one of those environments, you'll get it.

Reflecting on the downfall of Louis C.K., Dave Chappelle is puzzled in his superb new hour of stand-up comedy, The Bird Revelation.

Netflix apparently gambled that Chappelle was so famous he could just walk onstage and ruminate, even if the sentiments seemed to be punching down for no good reason, even if the material was self-aggrandizing, poorly paced and inelegantly shaped.

There are no featured audience reviews yet. Click the link below to see what others say about Dave Chappelle: Equanimity & The Bird Revelation!