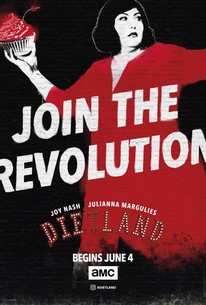 Critics Consensus: The well-acted Dietland delivers timely and engaging social commentary with enough humor and scathing wit to make up for an occasionally scattered narrative approach.

Critic Consensus: The well-acted Dietland delivers timely and engaging social commentary with enough humor and scathing wit to make up for an occasionally scattered narrative approach.

A wickedly funny and extraordinarily timed satire about Plum Kettle (Nash), a ghost-writer for the editor of one of New York's hottest fashion magazines. Struggling with self-image and fed up with how she's treated by her boss and society, Plum sets out on a wildly complicated road to self-awakening. At the same time, everyone is buzzing over news reports about men, accused of sexual abuse and assault, who are disappearing and meeting untimely, violent deaths. Plum also finds herself in the middle of two warring factions -- one sisterhood who may be responsible for the attacks on male harassers, and the other which preaches female empowerment. She straddles these two groups, trying to make sense of the changing world and her part in it.

Will Seefried
as Ben
View All

Creator Noxon certainly has put together an attention-getter in times when growing numbers of prominent men very deservedly have been exposed for past and sometimes ongoing sexual misconduct.

Watching the show toss a million balls in the air is riveting, even if I have no particular expectation it won't ultimately drop most of them.

Dietland does establish a distinct personality, and fast.

Sometimes you watch something, and it just has the stuff. Dietland may be a mess, but it's got the stuff.

The writing, direction and acting take absolutely no prisoners.

When this show works it gets its revenge on the beautiful people, not with bitterness, but with a smile.

Some developments come to fruition in a satisfying manner, but too many do not.

With a tone that, especially at the beginning, is disconcerting, the series shouts loud and clear its message against the dictatorship of the image. [Full Review in Spanish]

There are no featured audience reviews yet. Click the link below to see what others say about Dietland: Season 1!