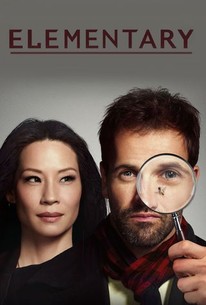 Critics Consensus: It may not appeal to purists, but Elementary provides a fresh new spin on Sherlock Holmes, and Jonny Lee Miller shines in the title role.

Critic Consensus: It may not appeal to purists, but Elementary provides a fresh new spin on Sherlock Holmes, and Jonny Lee Miller shines in the title role.

Jonny Lee Miller stars as Sherlock Holmes in this modern-day US retelling that finds Sir Arthur Conan Doyle's famous consulting detective living and working in New York City. As the first series begins, the eccentric Holmes has escaped to Manhattan after a fall from grace in London and a stint in rehab to battle drug addiction. His wealthy unseen father pays for a sober companion, Joan Watson (Lucy Liu), to live with his son, much to Sherlock's dismay. He believes his cure lies in using his extraordinary powers of deduction to help the NYPD solve cases. But slowly Joan, a former surgeon, begins to win Holmes' trust and proves to be a valuable assistant in crime solving, due to her extensive medical background. The duo work cases with Capt. Tommy Gregson (Aidan Quinn), who previously witnessed Sherlock's brilliance while on assignment with Scotland Yard. Jon Michael Hill also stars as detective Marcus Bell.

Johnny Simmons
as Adam Kemper at 19

F. Murray Abraham
as The Actuary

Andrew Chamberlain
as Adam Kemper at 12

Judy Kuhn
as Board Member

Berto Colon
as Will

Judy Kuhn
as Board Member

By the mystery's big reveal, a farce of technology that will make anyone who's recently bought a cellphone scoff, I was near screaming with irritation.

Elementary should fit snugly alongside the other procedurals on CBS.

Stylishly directed, Elementary is one loaded show, including its wonderful, well-matched leads.

Two things are going for this latest adaptation -- solid production values and a talented lead actor. Make that three things -- a network that knows just what viewers want.

Reinventing the greatest detective worked recently for PBS, and it works once again for CBS.

A clever twist only works if there's a good story backing it up though and Elementary delivered on both counts.

It's a competent series which puts an entertaining twist on an overly-familiar genre. But, no, it's not better than Sherlock.

You can't take your eyes off the charismatic [Lee Miller], or Liu for that matter, and the series has grown better and better.

How's that for a twist?

There are no featured audience reviews yet. Click the link below to see what others say about Elementary: Season 1!