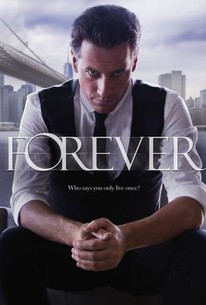 In this drama series, Dr. Henry Morgan (Ioan Gruffudd) is a New York City medical examiner who strangely becomes resurrected every time he dies. In the series premiere, a train accident kills Morgan, but he soon resurfaces in the Hudson River. But, after centuries of keeping his power a secret, an unknown person contacts Morgan, claiming to have witnessed his immortality. Abraham (Judd Hirsch), Morgan's confidant and adopted son, advises him to continue his normal routine. However, the unknown person soon reveals himself, and a resulting conflict leaves Morgan to wonder how long his power will remain a secret.. Along the way, Morgan and Det. Jo Martinez (Alana de la Garza) encounter cases that include the death of a wealthy matriarch, a "Jack the Ripper" copycat, the murder of a famous jazz musician's son and a mummified woman found behind a wall in a famous punk club.

Pilot Look Before You Leap The Fountain of Youth The Art of Murder The Pugilist Break The Frustrating Thing About Psychopaths New York Kids The Ecstasy of Agony 6 A.M. The Man in the Killer Suit

Just OK, although I like Gruffudd in the role.

Gruffudd's characterization is a bit uneven; sometimes he's gruff and aloof and still pining over the loss of his World War II-era love, yet he's able to turn on the charm when he wants to.

Feeling familiar is the least of Forever's problems. The worst offense is wasting Gruffudd's assets on an underdeveloped premise better suited for a made for TV movie.

Castle with a twist and a pair of hugely attractive leads.

A strong hero and a positive theme enrich this crime drama.

Too much of Forever is either overwrought or half-baked.

Eight half-hour episodes that'll keep you guessing, make you laugh and even cry make up the first season of Forever.

It's nutty, but oddly compelling.

It's more about enjoying being in the company of these charismatic characters, and there's strong chemistry between the debonair Gruffudd and the earthy De La Garza.

Forever places an appealing cast in the unfortunate position of playing out a storyline in which many elements are either unexplained or simply don't make sense.

There are no featured audience reviews yet. Click the link below to see what others say about Forever: Season 1!