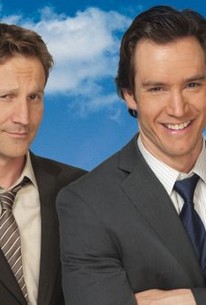 Two offbeat, young-gun street lawyers join a top-notch law firm in this buddy-legal drama. The brash, bad-boy antics of Jared Franklin and Peter Bash (Breckin Meyer and Mark-Paul Gosselaar) shake up the buttoned-down firm, which is headed by eccentric boss Stanton Infeld (Malcolm McDowell), whose shifty nephew (Reed Diamond)---a corporate-climbing lawyer at the firm---is none too pleased with Franklin and Bash's unconventional methods and sets out to take the pair down. An ex-con and an agoraphobic researcher serve as colorful assistants to the title characters, whose early cases are highlighted by a family dispute over Kirk Gibson's 1988 World Series home-run ball.

12 Steps To Better Relationships According to the Cast of Love

Pilot She Came Upstairs to Kill Me Jennifer of Troy Bro-Bono You Can't Take It With You Big Fish Franklin vs. Bash The Bangover Bachelor Party Go Tell It on the Mountain

Franklin & Bash is not a guilty pleasure, because there's no pleasure here to regret, just strained, sexist, frat-boy self-love.

Franklin & Bash is exactly what a summer TV show should be: fun.

Franklin & Bash is one slick stew. The cast is a first-rate collection of familiar faces who've never quite found the right fit, till now.

As law dramas go, this one makes a better case than expected.

TNT bills Franklin & Bash as a dramedy, but it is more accurately a comedic bromance laced with pop-culture jokes and a dash of legal jargon to trick you into thinking you spent an hour on something of substance.

If they don't entertain us as much as they seem to entertain themselves, we still catch some of their buzz.

Your enjoyment of Franklin & Bash may depend on your tolerance for frat-boy antics and smarmy whimsy.

A new lawyer show the network's calling an "offbeat drama"--though it's hard to think of something whose beats are this predictable as off-anything.

As oversexed as it is underachieving, Bash is the kind of original programming that makes you reconsider your antipathy toward reruns.

It tries to coast on banter that's not particularly snappy, and on a snickering dependence on sex-related gags and plots.

There are no featured audience reviews yet. Click the link below to see what others say about Franklin & Bash: Season 1!