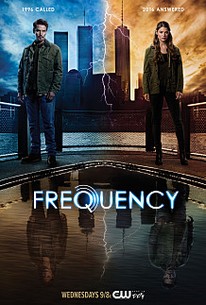 When Raimy Sullivan (Peyton List) lost her father Frank (Riley Smith), an undercover cop, at the age of 8, she believed he was turned and vowed to never follow in his footsteps. Now a detective herself, Raimy begins to uncover evidence that her father may not have been a corrupt cop like she was led to believe. When lightning strikes the antenna of his old, broken ham radio, Raimy begins to hear a man's voice coming through. Realizing that the man she is communicating with is her father from decades earlier, Raimy warns him of his impending death and is able to prevent it. However, by altering the past she sets off a butterfly effect that changes her reality in ways she could never have predicted. The first season also stars Devin Kelley, Anthony Ruivivar and Mekhi Phifer.

Curtis Young
as Karl
View All

Frequency does a pretty solid job of juggling its balls and creating new intrigues.

There is real emotional sincerity here, as well as smart writing and strong acting.

I'm a sucker for these stories, and this one hit all the right notes. Peyton List and Riley Smith do a wonderful job as father and daughter over the airwaves.

I'm a sucker for anything time travel, and Frequency is looking like it will deliver.

The most urgent problem is that Frequency is based on source material that was already derivative, a grab bag of tropes borrowed from movies including Back to the Future, Sliding Doors and Ghost.

The father-daughter duo of Frank and Raimy are the core emotional element of Frequency, grounding the high-concept sci-fi drama in reality.

Hey, we're not watching television for the realistic aspects, not even when we watch reality TV. So, once we're on board with the ham-radio-bridging-two-decades premise, there's a lot to like about Frequency.

There are no featured audience reviews yet. Click the link below to see what others say about Frequency: Season 1!