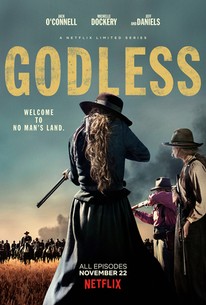 Critics Consensus: Vistas and violence root Godless firmly in traditional Western territory, but its female-driven ensemble sets it apart in a male-dominated genre.

Critic Consensus: Vistas and violence root Godless firmly in traditional Western territory, but its female-driven ensemble sets it apart in a male-dominated genre.

Notorious criminal Frank Griffin (Jeff Daniels) and his gang of outlaws are on a mission of revenge against Roy Goode (Jack O'Connell), a son-like protégé who betrayed the brotherhood. While on the run, Roy seeks refuge with hardened widow Alice Fletcher (Michelle Dockery), an outcast herself, in a worn-down, isolated mining town of La Belle, NM--governed mainly by women. When word reaches La Belle that Griffin is headed their way, the town bands together to defend against the murderous gang in a lawless western frontier.

An Incident at Creede The Ladies of La Belle Wisdom of the Horse Fathers & Sons Shot the Head off a Snake Dear Roy... Homecoming

There's great acting to be found, and some thoughtful writing-and if you like sweeping panoramas of the sun setting across an untamed wild, then you're in excellent, if heavy, hands.

Every moment counts, making for an overall experience as to-the-point as Mary Agnes herself. Even when it appears to be taking some extra time for itself, "Godless" isn't wasting a second.

... it proves that truer stories can be told-ones that capture the allure of what brought so many westward in the the first place, while more honestly portraying history.

I'm a sucker for the stories of justice and revenge at the heart of most good Westerns. And I love it even more when those stories recognize the social realities of the time. Godless does all that and more.

In Godless, we see a black town, literally called Blackdom, and its inhabitants as "others..." Think that's bad? Native American characters do not do better

I can definitely appreciate Scott Frank and Steven Soderberg tackling this particular untouched (in terms of Hollywood) subject matter.

It shows, in a bad way, that the original material was designed for a short film format, and you can tell that there was no script to fill the more than seven hours that the miniseries lasts. [Full Review in Spanish]

Godless reveals there are still plenty of ways to make the Western seem fresh and exciting.

If genre cliches are brought into a work to be deconstructed, but said cliches remain stylized and centered, then what's actually being upended in this process?

Godless is a work of confident artistry, casting well-worn clichés and archetypes in a fresh, illuminating light.