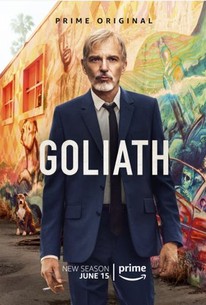 Billy Bob Thornton will reprise his role as Billy McBride who, after winning a huge verdict in the Borns Tech case, is reluctantly pulled back into the law when his friend's 16-year-old son is arrested for a double homicide. However, as Billy, Patty (Nina Arianda, Florence Foster Jenkins) and the team start to investigate what appears to be an open and shut murder case, they begin to untangle a deadly conspiracy in the seedy underbelly of Los Angeles, where drugs, real estate and politics intermingle. Once again, Billy finds himself facing a new Goliath, one that is as formidable as the city's mayoral race and as tall as the skyline itself. Thornton won the 2017 Golden Globe for Best Actor in a Drama Series for Goliath's first season.

Julia Jones
as Stephanie
View All

Goliath doesn't take full advantage of Tom's depraved habits, but anyone focused on this particular arc should be satisfied with its ending, as well as the season's.

There are all sorts of twists and turns in this second season which is watchable but definitely not for the squeamish. There is a lot of gore this season and some images you can not unsee.

This second season gets personal for McBride and takes things to brand new heights as he fights for Julio's innocence, while ducking and dodging the implications of mixing business with pleasure.

The whole thing completely runs off the rails after the midway point - subplots are abandoned; motivations stop making sense.

Like Amazon's Bosch, this L.A. crime story is satisfying in its confident approach to a familiar genre.

With relaxed, naturalistic dialogue and real life settings, it's a series that doesn't deserve to be missed.

You can see where all of this is going but the joy of Goliath is the way it chooses to get there.

Leisurely, but at least the ride is classy.

There are no featured audience reviews yet. Click the link below to see what others say about Goliath: Season 2!