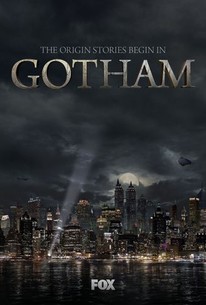 Christopher Baker
as The Goat/Raymond Earl

PJ. Griffith
as The Catcher

Fox should be commended for making a Big 4 broadcast network series seem big, special and distinctive.

This is solid, confidently made television, the kind of programming that has me interested in where it's going next thanks to high production values and an expertly assembled cast.

Here's where Gotham surprised me. Going by tonight's well-crafted pilot alone, there does appear to be a spark of original thought flickering beneath all those draggy origins.

Anyone who loves Batman, naturally, will be watching Gotham, and knowing the Batman world makes the show more fun. But it's also surprisingly accessible to viewers who just like a good action-packed cop drama with a dry sense of humor.

The strong cast could make this one fly.

Most viewers will be content to let young Bruce mature off-screen. Although it would seem foolish to make a Batman series in which he is a relatively minor character, Gotham starts off fine without him.

There's a fine line between campy goodness and cartoonish badness, and Gotham clearly has no idea where that line is drawn.

Gotham may not be horror, but it is dark, it is well done, and it should be on your fall TV schedule.

All told, this was a vivid, entertaining start.

Not all of Gotham is as successful... but this dark (and cinematically shot) series will feel right at home as the lead-in to Fox's similarly toned Sleepy Hollow.

When you have a show that is set in the same universe as the great Batman mythos that we read about in the comic-books, you really need to get the scent of Gotham City and the criminality real, and this first season truly does. With heroes that really feel real and villains that truly are scary and threatening, the show managed to bring forth the soul that the city had in the comics. Where the show is at its strongest, is when it comes with the tie-ins to many of the villains from the comic-book and even the new ones like Fish Mooney, played brilliantly by Jada Pinkett Smith. Where the show lacks, however, is with the tie-ins to Bruce Wayne who wants to find his parent's killer. That is by far the worst parts of the show, but luckily, with brilliant writing and great characters, it always managed to get back on a good and well-formed track.

I just started watching this amazing TV show last week and I've already finished the whole season. The TV show episodes are always a mystery and always seem to keep my attention. My only complaint from a comic standpoint is that they completely mess with the original character thus creating a new but not necessarily a bad change. I thought the TV shows score should be in the 90% area.

We are now two episodes into the darkly somber prequel series Gotham, the city of Batman where he is simply Bruce Wayne, a child whose parents are murdered before his eyes. No, this is not a spoiler. Batman’s origins have been known since DC Comics first released a Batman issue in the 1940’s, and of course, who can forget the iconic Batman trilogy with Christian Bale from the past decade. That goes without saying, Michael Keaton, George Clooney, and Val Kilmer all have their Batman installments from the 90s. And yet, Gotham has an ambiance all its own—something to be grateful for in a sea of Batman cinema. This gothic-style television series, which premiered on FOX last Monday, has two highly promising episodes under its belt, and the web is only beginning. As a prequel series, Gotham begins by introducing us to a multitude of characters, many of which share an uncanny resemblance to young villains—such as a young girl with catlike reflexes and an affinity for pick-pocketing. Sound familiar? This girl also happens to witness the death of the Wayne parents from atop an outdoor stairwell, as Bruce Wayne watches both his parents mugged and shot to death as he screams in. It makes for one spectacular opening. The series follows Detective James Gordon, a man most Batman fans will be familiar with from the films and comics. This is, essentially, a crime drama series that happens to be a comic book adaptation. Gordon begins by investigating the gruesome murder of Bruce’s parents, Thomas and Martha Wayne. This leads him into a string of criminals, whereby we can begin to suspect as villains: Carmine Falcone, known as The Roman; Oswald Cobblepot, known as Penguin; Selina Kyle, the young girl with catlike skills mentioned earlier. We see glimpses of The Riddler and Poison Ivy as well, and the list is only beginning. Trouble is just beginning to brew in Gotham. One of the show’s best attributes is its dark, gritty atmosphere. It is the Gotham we all expect—dirty, grimy, and there’s crime and deceit on every corner. This is an entirely new Gotham than Christopher Nolan’s Dark Knight trilogy or the 90s films. Fox has made Gotham gorgeously macabre and evil is always waiting silently. After two mind-numbing, genre-bending episodes, it is safe to say Gotham is going to continue being one of the most enticingly suspenseful shows this fall. It will undoubtedly be an experience watching a fan favorite superhero rise from his misery to the life of a vigilante—although, of course, that will take a while. For now, we have an explosively exciting new crime series with an exquisite ambiance and alluring new characters to keep up with on Fox every Friday night.

DC attempts a Batman prequel series with Gotham, a gritty crime procedural on FOX. In Season 1 rookie detective Jim Gordon sets out to clean up the GCPD of corruption; meanwhile a young Bruce Wayne looks into the murder of his parents, and mid-level gangster Oswald Cobblepot plays a dangerous game with the Falcone and Maroni crime families. Unfortunately this divided focus hurts the show, and despite being a prequel it rushes to bring in all the familiar Batman characters (Selina Kyle, Edward Nygma, Harvey Dent, Lucius Fox, etc.). And, it desperately tries to turn Bruce Wayne into Batman by having him physically train and conduct criminal investigations (as a 12-year old). Visually, the show has an interesting neo-noir style, and there are some intriguing cases-of-the-week. However, Season 1 of Gotham doesn't fully commit to the prequel idea and as a result it ends up being a messy and confusing police procedural with faux superhero elements.