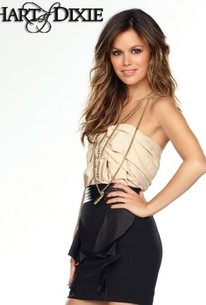 As the second season of this small-town drama opens, Zoe (Rachel Bilson) gets to choose whether she wants a relationship with Wade (Wilson Bethel) or the newly available George (Scott Porter), and she opts for Wade. But it's not all smooth sailing for the lovebirds, as they deal with challenges such as Zoe's busy work schedule and Wade's ex-girlfriend. Meanwhile, still reeling from being left at the altar by George, Lemon (Jaime King) decides to make some major changes in her life, including moving out of her family's home and embarking on some new business ventures. She also becomes a campaign manager for Lavon (Cress Williams), who's surprised to find Ruby (Golda Brooks), his ex-girlfriend from high school, running against him in his bid to be reelected as BlueBell's mayor. The town of BlueBell faces several threats this season, including the proposal of new shopping mall and a flu epidemic, but that doesn't stop the mayor from trying to earn the town some tourist dollars by making it a spring-break destination.

Myles Brooks
as Kid #2
View All

I Fall to Pieces Always on My Mind If It Makes You Happy Suspicious Minds Walkin' After Midnight I Walk the Line Baby, Don't Get Hooked on Me Achy Breaky Hearts Sparks Fly Blue Christmas

I loved the premiere, even if I would have rather seen more of Annabeth and less of Ruby, but other than that, it was solid.

It may be a bit cliché, but there's something about Zoe's quirky encounters with the small-town residents that make it work.

If you're been a fan of the show, you will most likely enjoy the premiere but also feel some excitement as to what will be coming up this season.

As irritating as it is to watch Zoe ping pong between Wade and George, her frustration over what happened was hilarious to watch.

Hart Of Dixie isn't below taking the easy road, but it's also incredibly easy to watch, the kind of confection that deserves a place in the televisual landscape.

They've seemed to change the tone of the show to funnier and much lighter than season one, so far, and I'm glad.

There are no featured audience reviews yet. Click the link below to see what others say about Hart of Dixie: Season 2!

Discuss Hart of Dixie on our TV talk forum!