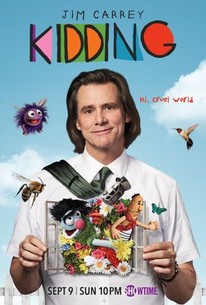 Critics Consensus: Fans of Jim Carrey's slapstick may be disappointed, but other viewers may find a surprisingly poignant examination of life and grief in Kidding.

Critic Consensus: Fans of Jim Carrey's slapstick may be disappointed, but other viewers may find a surprisingly poignant examination of life and grief in Kidding.

Jeff Piccirillo (Jim Carrey) is the face of a longtime children's TV show called "Mr. Pickles' Puppet Time." However, behind his jovial Mr. Pickles mask, Jeff struggles with the death of his son Phil (Cole Allen), his separation from his wife Jill (Judy Greer), and his conflict with his father Seb (Frank Langella), with whom he works as the producer of his TV show. Rounding up the first-season cast of "Kidding" are Catherine Keener as Jeff's sister Didi, Juliet Morris as Didi's daughter Maddy, Bernard White as Didi's husband Scott, and Justin Kirk as Jill's new boyfriend. Cole Allen also stars as Will, Jeff's other son and Phil's twin. Guest stars include Tara Lipinski and Conan O'Brien as themselves.

Cole Allen
as Will

It's tough to tell if this is going to add up to a coherent story, but I'm really hopeful that Jim Carrey and Michel Gondry will create a series that's worth spending so much time with these characters' pain.

A marvelous character study and Showtime's best series in years.

I'm going to keep watching this show, with its wizardly director and mythopoeic lead actor, because I'm confident that at some point it will drastically illuminate the nature of existence-yours and mine.

Bold, provocative and at its core heartbreakingly endearing, it borrows from the original mold -- and then breaks it.

Langella, in particular, is remarkable as a man who is unfeeling and perfectly comfortable with it. If and when Jeff becomes more credible, and not just a fairy tale persona, the entire ensemble will be solid as a rock.

Kidding is weird. It's tough to know what to make of it. This is not a complaint.

Isolate any episode of Kidding's first season and it immediately becomes clear that this is not in fact 'Mr. Rogers has a breakdown,' but instead something bolder and bigger and wonderfully, inescapably weirder.

It has already delivered some surprises and a perfect Carrey, emotional but eccentric, serene but hallucinated, perfect for an unpredictable character. [Full Review in Spanish]

There is a lot that is not very funny about the decidedly bleak Showtime series Kidding from Jim Carrey and Michel Gondry, and that's both good and bad... However,... [it] is still worth watching if you can grind through.

There are no featured audience reviews yet. Click the link below to see what others say about Kidding: Season 1!