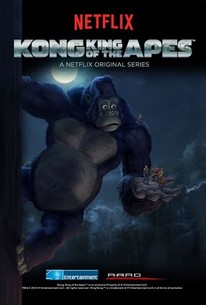 It's 2050 and the future looks bright for San Francisco's Alcatraz Island since its transformation into the most impressive Natural History and Marine Preserve on the planet. But when the star attraction suddenly goes ape and KONG becomes public enemy number one, the villain that framed him is free to unleash an army of gigantic robotic dinosaurs on the unsuspecting world. Ironically, Kong is the only force formidable enough to stop these super-powered dinosaurs and the evil genius manipulating them. But Kong is now the world's most hunted fugitive. Fortunately, there are a handful of young humans who know the truth and are willing to risk their lives to help Kong evade capture, while he battles to save humankind.

Critic Reviews for Kong: King of the Apes: Season 1

CGI take on primate's story is violent but entertaining.

Audience Reviews for Kong: King of the Apes: Season 1

There are no featured audience reviews yet. Click the link below to see what others say about Kong: King of the Apes: Season 1!

Discuss Kong: King of the Apes on our TV talk forum!