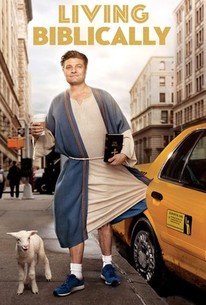 Film critic Chip Curry (Jay R. Ferguson) is married to Leslie (Lindsey Kraft) and they are expecting their first child. When Chip's best friend dies, he decides to start following the Bible's teachings to the letter. Realizing that the Bible's rules don't really translate well to the modern world, he puts together a God Squad to help him live according to God's wishes. In Season 1, Rabbi Gil Ableman (David Krumholtz) and Father Gene (Ian Gomez) invite Chip not to use smartphones as it would be like worshiping false idols, to give back all the office supplies he stole from work, and they teach him the power of prayer.

Adapted from a bestseller that's not the Bible, Living Biblically finally comes to fruition as a CBS sitcom with an abominable laugh track.

Ian Gomez and David Krumholtz have a sinfully good time playing two-thirds of a joke about a priest, a rabbi and a minister walking into a bar.

The premise promises something unusual, but the labored execution and frantic performances are so sitcom familiar.

For a show that strives to be unique, this comedy still seems very safe.

Go read Jacobs' book instead. You'll get a lot more laughs and have a better view of what it's like to live a biblical life.

Given the open-minded, constructive start the show has already made, it's not unreasonable to hope it could continue onto some firmer (and hopefully a little funnier) ground.

Living Biblically makes an effort to bring up broader ethical teachings from Scripture-not just concepts pulled from Levitical obscurity-which could have wide appeal if the setups weren't so flat.

By being as safe as possible, Living Biblically offends the senses as broadly as its humor aims.

There are no featured audience reviews yet. Click the link below to see what others say about Living Biblically: Season 1!