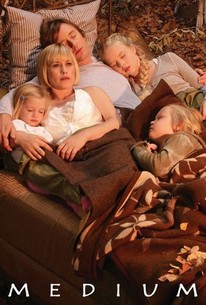 In Season 2 of the paranormal drama, time plays tricks on spiritual medium Allison DuBois (Patricia Arquette) as she has many dreams involving the past, as well as dreams in which incidents from the past result in an altered present. But first, the second season picks up with the conclusion of Season 1's final episode: Capt. Push (Arliss Howard) is still in a coma and Allison is trying to decipher confusing messages to help stop a serial killer. Soon after, Allison starts having dreams set in the past, including one that takes place in a mental institution in 1959. A woman committed to the institution claims she is Allison DuBois, living in 2005. Then Allison flashes back to her high-school days, when a friend was seeking fame as a model, and she connects these visions to a present-day missing-person case. Allison later dreams of the unborn son she miscarried 15 years earlier, and imagines what life would be like if he had lived. She also envisions an alternate life in which she becomes the lawyer she originally set out to be. Allison's dreams about her current job working for DA Devalos (Miguel Sandoval) include a disturbing recurring one in which the office staff is murdered. When Devalos runs for reelection, Allison dreams that a murder will ruin his chances. At home, Allison must talk to her daughters about what she does for a living after Bridgette (Maria Lark) inquires about her mom's job for a school assignment. Allison's work continues to affect her family, such as when the spirit of a doctor (who was seen in Season 1) returns and targets daughter Ariel (Sofia Vassilieva). Season 2 guest stars include David Carradine and Kelsey Grammer, who is one of the series' executive producers. In Allison's visions, Grammer appears as the Angel of Death, and in her waking life he's a shady businessman.

Medium is one of network TV's relatively unheralded gems, a well-acted, atmospheric drama that manages to create an intriguing mini-drama each week, as well as show domestic life in all its turbulent, messy beauty.

There are no featured audience reviews yet. Click the link below to see what others say about Medium: Season 2!