Home > Once Upon a Time in Wonderland > Season 1 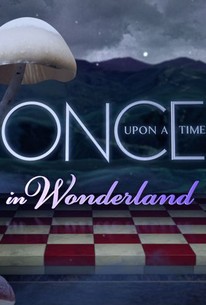 Critics Consensus: Once Upon a Time in Wonderland is attractive to the eye and pleasantly narrated, but it loses some luster due to a jumbled story and Wonderland's unlikable inhabitants.

Critic Consensus: Once Upon a Time in Wonderland is attractive to the eye and pleasantly narrated, but it loses some luster due to a jumbled story and Wonderland's unlikable inhabitants.

Once Upon a Time in Wonderland: Season 1 Photos

In the first and only series of this spin-off from "Once Upon a Time," a young Victorian Englishwoman named Alice (Sophie Lowe) is taken to an asylum after sharing fanciful tales of a magical world on the other side of a rabbit hole. Just before she's about to have an operation to make her forget about these tales, the Knave of Hearts (Michael Socha) saves her and transports her back to Neverland. Upon returning, she tries to reunite with Cyrus (Peter Gadiot), the genie with whom she fell in love. But the reunion is not easy, because Neverland is populated with its share of villains, including Jafar (Naveen Andrews) and the Red Queen (Emma Rigby). As the series unfolds, flashbacks are used to reveal many characters' backstories, including details about how they wound up in Neverland.

Michael Socha
as Knave of Hearts

Jason Burkart
as Little John/Traveler One

Forbes Angus
as Villager
View All

Critic Reviews for Once Upon a Time in Wonderland: Season 1

It's all meant to be a paean to the imagination. Too bad the effects pry some of us out of our imaginations and into the tech lab.

Wonderland promises to be eye-popping. What about heart-rending?

Why borrow a classic if you're not going to do anything with it?

As in Once, the computer-generated landscapes and creatures don't quite work - they look unworldly, but in a cheesy way.

it's Alice who carries this tale, and it's good to see her again.

Alice's battles with various computer-animated and live-action threats are entertaining and, usually, rather witty, though her traveling companions, the White Rabbit and the Knave of Hearts, get most of the best lines.

I'd assume we'll get plenty more back story on Alice and Cyrus the genie, but so far I liked what I saw. Even with the few scenes they shared they had some nice chemistry.

Wonderland stands on its own as a new and thrilling fantasy world to explore.

If you are a romantic, you'll love Once in Wonderland. If not, expect a lot of eye rolling in between the good parts... But some flashes of wit, imagination, and goofy-but-fun action hint that it may end up being worth the ride.

If over -the-top fairy tale stories full of true love and elaborate costumes aren't your cup of tea, you probably won't fall head over heels for Wonderland, but it's still worth giving a look. It's just that much fun.

Audience Reviews for Once Upon a Time in Wonderland: Season 1

A terribly misconceived series, Once Upon a Time in Wonderland is a round peg in a square hole. Creators Edward Kitsis and Adam Horowitz try to turn Alice in Wonderland into a story of true love by mixing it with parts of Aladdin, and it just doesn't work; it rings false on every level. Sophie Lowe is horribly miscast as Alice, as she has no chemistry with her co-stars and never becomes an engaging character. Emma Rigby and Naveen Andrews however, are cast exceptionally well as the Red Queen and Jafar. In fact, Rigby steals the show and quickly becomes an incredibly compelling character with a tragic backstory. But even the best acting couldn't overcome the atrocious CGI sets, which couldn't look more fake if they'd been drawn with Magic Marker. While there are a few interesting episodes, Once Upon a Time in Wonderland is a train wreck that bears little resemblance to Lewis Carroll's work.

Discuss Once Upon a Time in Wonderland on our TV talk forum!