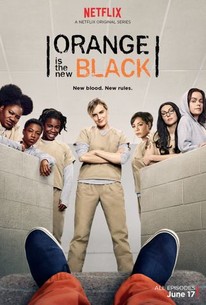 Critics Consensus: Orange is the New Black is back and better than ever, with a powerful fourth season full of compelling performances by the ensemble cast.

Critic Consensus: Orange is the New Black is back and better than ever, with a powerful fourth season full of compelling performances by the ensemble cast.

Season 4 picks up where Season 3 left off: the inmates splashing about in the nearby lake after the mass escape; and Alex facing a menacing prison guard in the greenhouse. There's also another matter, which—once everyone's rounded up—causes headaches for everyone: a flood of new inmates. Piper also finds herself facing difficulties with the Dominicans who, after she rebuffs them, launch their own panty business; and she also inadvertantly forms and becomes de facto leader of a white-power group. Healy, meanwhile, takes a special interest in Lolly, who reminds him of his mother; celebrity chef Judy King makes herself at home in a spacious cell-slash-suite; Taystee becomes Caputo's personal assistant; and a peaceful protest by the inmates results in an unexpected death.

News & Interviews for Orange Is the New Black: Season 4

View All Orange Is the New Black: Season 4 News

Critic Reviews for Orange Is the New Black: Season 4

Based on the first six episodes of the 4th season, OITNB remains fresh, funny/sad, smart, inventive, well-written, and particularly well-acted.

Netflix's Orange Is the New Black is better than ever in its dark, dauntless fourth chapter.

The bite is back with a vengeance while the supply of story lines has multiplied rather than calcified. As with HBO's Game of Thrones, the best seems yet to come after rejuvenating seasons that will leave many a faithful fan stoked for more.

Season Four of OITNB is a glorious return to form: a pitch-perfect mix of comedy and drama astonishing in just how real it all feels.

Despite all this change -- including the fact that this kickoff episode featured no flashbacks -- the main appeal of the show seems to remain intact: the banter.

Despite some racial stereotyping, the sheer breadth of representation vaults the show to heavyweight status in the realm of inclusive media.

OITNB has reclaimed its place as one of the best dramas going around at the moment and if this standard maintains going forward then that's not changing anytime soon.

Fourth time around, Orange Is The New Black is back to its sparky, laugh-out-loud, emotionally-involving best.

The main thing I appreciated about this particular season is how much they focused on humanizing every character, guard, prisoner, and whomever.

Audience Reviews for Orange Is the New Black: Season 4

The annoying characters were gotten rid of while others developed more to be likeable. It's a big step up from the previously cheerful tone to some serious drama.

Discuss Orange Is the New Black on our TV talk forum!