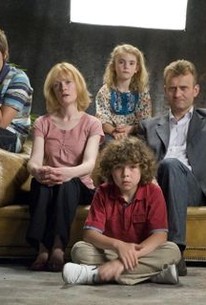 A British sitcom chronicling the ups and downs of the Brockmans, a family of five headed by parents Pete (Hugh Dennis) and Sue (Claire Skinner). Additional characters introduced in Season 1 include Sue's sister Angela (Samantha Bond) and her father (David Ryall). Issues addressed in Season 1 include son Ben's lying, son Jake's struggle with being bullied, and the sometimes-tense relationship between sisters Sue and Angela.

A sitcom about everyday family life may sound like an overdone bore, but Outnumbered strips everything cheesy away with an incredibly naturalistic style that most American shows would never attempt.

It's a comedy that's more likely to draw recognizable smiles of been-there, experienced-that than it is to conjure real laughs.

Outnumbered was a subtly funny series.

There's a lot of skill being brought to bear.

There are no featured audience reviews yet. Click the link below to see what others say about Outnumbered: Season 1!