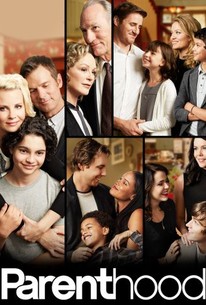 Critics Consensus: Parenthood remains a top-notch family drama in its sixth and final season, thoughtfully portraying its complex and compelling characters and the enduring power of resilience.

Critic Consensus: Parenthood remains a top-notch family drama in its sixth and final season, thoughtfully portraying its complex and compelling characters and the enduring power of resilience.

The sixth and final season of this family drama is all about life-changing events for the Braverman clan, including a battle with health issues for Zeek (Craig T. Nelson). Some of the Bravermans reexamine important relationships in their lives: Amber (Mae Whitman) and Ryan (Matt Lauria) face several tough decisions about their future; and Hank (Ray Romano) and Sarah (Lauren Graham) ponder the depth of their commitment to one another. Meanwhile, Max (Max Burkholder) tries pursuing friendships and romance, and he learns about rejection along the way. On the work front, Adam (Peter Krause) and Kristina (Monica Potter) rush to open their new school; and Crosby deals with slow business at The Luncheonette. Former regular Sarah Ramos makes a return appearance as Haddie in the show's final episode.

Vegas Happy Birthday, Zeek The Waiting Room A Potpourri of Freaks The Scale of Affection Is Fluid Too Big to Fail These Are the Times We Live In Aaron Brownstein Must Be Stopped Lean In How Did We Get Here?

The writers opted to take most story lines where fans hoped they would go.

The show's creators have stealthily, quietly carved out a cast of characters who defy gender clichés, on both sides.

It's been the most sincere program on television, often mocked for its many scenes ending in tears, but never relenting in its goal to present parenthood as a difficult yet ultimately rewarding adventure.

The parents of Parenthood, who include old-school TV guy Ron Howard, can be proud of how the kid turned out.

It's this aspect of this show, the unwaveringly honesty depiction of family life, whether triumphant or tragic, that makes Parenthood so relatable to so many.

Because Howard and longtime producing partner Brian Grazer are at the helm, Parenthood seems to be getting the care and feeding it deserves -- and the cast is peppered with proven performers who can deliver the goods.

Parenthood is one of the most frustrating shows I've ever loved.

The first hour of Parenthood's final season found the Braverman clan dealing with a number of thoroughly grown-up changes, all of them eliciting reactions ranging from, "How could she?!" to "Can someone pass the Kleenex?"

The whole finale is fantasy camp, but that's just the way it had to be.

There are no featured audience reviews yet. Click the link below to see what others say about Parenthood: Season 6!