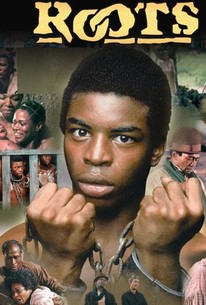 Critics Consensus: Roots may shave off the nuances of Alex Haley's landmark book for the sake of slicker storytelling, but excellent performances and the intrinsic power of this generational tale make for revelatory television.

Critic Consensus: Roots may shave off the nuances of Alex Haley's landmark book for the sake of slicker storytelling, but excellent performances and the intrinsic power of this generational tale make for revelatory television.

The landmark dramatization of Alex Haley's classic saga followed his ancestors from Africa into slavery and then to their freedom in the post-Civil War South. Americans watched in record numbers as the epic aired on eight consecutive nights and went on to receive an unprecedented 37 Emmy nominations (winning for nine, including Outstanding Limited Series). Haley wrote in TV Guide: ` `Roots' speaks of the American human drama, in which ancestrally we all came from somewhere across the ocean.'

John Amos
as Kunta Kinte (as an adult)

Raymond St. Jacques
as The Drummer

Lane Binkley
as Martha
View All

The only discretion that should be exercised on Roots is to make sure everyone in your family plans to stay home every evening to watch it. It is the most important, most engrossing show of the television season.

Breathless -- that's the word to sum up the impact Roots had on me and, if it doesn't have that same impact on the rest of Sydney's population, then Channel 10 might as well dig a hole and bury itself.

Seldom has quality been so richly rewarded. Roots deserved every viewer it got.

While I was watching Roots, the thought crossed my mind many times that it was a shame Haley's book couldn't have been put into the hands of a truly gifted writer-director... But it's pointless to speculate what might have been. What was wasn't' bad.

Television's Roots has its faults, but it begins Sunday as a worthy and compelling dramatization of Haley's fascinating story.

Distressingly unworthy of its subject... Judged strictly as filmmaking, the TV version of Roots was not as good as its source. The adapters relied too often on the most obvious and expedient dramatic treatment.

The danger presently stalking the black psyche is that, in the wake of the critical acclaim awarded both the book and the TV film, the black roar of the sixties will be forgotten: in politics as well as art.

I think the work is an insult. To say its a cut above most commercial television drama is a backhanded compliment at best. Most TV drama, to paraphrase the Duke Ellington song, is lower than a snake down in a wagon track

Whoever it was who said that a picture is worth a thousand words has been disproved by this shallow, vulgarized adaptation of a powerful and moving book.

How surprising that in 1977, any American, of any skin, can still be making such discoveries about his neighbors. So it seems the nation sorely needs more experiences like that of Roots, never mind its flaws.

There are no featured audience reviews yet. Click the link below to see what others say about Roots: Miniseries!