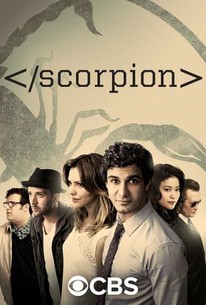 Walter O'Brien (Elyes Gabel), a computer genius, and some of his equally brilliant friends are recruited in Los Angeles by a special agent (Robert Patrick) with the U.S. Department of Homeland Security to investigate high-tech crimes. Initially, the group is hired to solve a crisis at LAX that leaves dozens of planes unable to land. During the case, O'Brien comes into contact with Paige Dineen (Katharine McPhee), a local waitress and mother of a mentally gifted son named Ralph (Riley B. Smith). Paige reluctantly joins the probe and proves to be an invaluable asset. She then becomes an official member of Team Scorpion. Other cases Scorpion investigates include the recovery of stealth technology in Bosnia, the discovery of a mole in the CIA, and the prevention of a nuclear reactor meltdown. In a more personal case, Ralph is questioned by the FBI after his dark Web game play inadvertently reveals the location of a CIA safe house and results in the murder of some CIA operatives. Eddie Kaye Thomas, Jadyn Wong and Ari Stidham also star.

Riley B. Smith
as Ralph

Method Man
as Lucky the King

If you don't think about its underlying exploitation of mental illness, it's easy enough to get lost in and forget about the troubles of the real world.

What I really want is simple: a weekly series based on one of my all-time favorite films: the 1992 caper flick Sneakers. Unfortunately, Scorpion is no Sneakers; it's much more flat-footed.

Homeland it's not. It's just another case-of-the-week procedural, and McPhee seems out of place as the diner waitress who falls in with the 'Big Bang'-ers.

Eddie Kaye Thomas ("American Pie") is fun as the occasionally felonious brainiac psychologist, but the rest of the characters are pretty one-dimensional, that one dimension being their social awkwardness.

Scorpion will provide familiar pleasures to viewers who like to know what's coming. Despite the title, this show has no sting.

This show is ridiculous but nevertheless fun and very easy to watch.

The ending is sweet but I really had no idea what was going on in the pilot. You don't have to be a genius to realize that, like O'Brien, the family-friendly series needs to strike a better balance between the fast-moving plots and the sensitive moments.

Like Elementary, Scorpion is a procedural with only a slight twist, but if not-so-evil genius is becoming a trend, I'm all for it.

Although it's inspired by a true story, the nerdy characters don't ring true.