Home > The Spoils of Babylon > Season 1 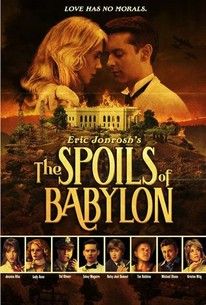 Critics Consensus: Kristen Wiig, Will Ferrell and a cast of other famous characters make The Spoils of Babylon a worthy watch for comedy fans, satirizing the classic television melodrama miniseries with hilarious visuals and clever content.

Critic Consensus: Kristen Wiig, Will Ferrell and a cast of other famous characters make The Spoils of Babylon a worthy watch for comedy fans, satirizing the classic television melodrama miniseries with hilarious visuals and clever content.

The Spoils of Babylon: Season 1 Photos

This spoof of miniseries that chronicle the dynastic, multigenerational sagas of dysfunctional families is a grand spectacle. Each episode is introduced by "Spoils" author Eric Jonrush (Will Ferrell) and the adventure commences with entrepreneur Jonas Morehouse (Tim Robbins) hoping to strike it rich in the oil fields of Texas, while his adopted son, Devon (Tobey Maguire), begins an affair with his daughter, Cynthia (Kristen Wiig). Later, World War II breaks out and Devon enlists, is shot down over the Pacific and becomes a POW. In England after the war, Devon meets and marries Lady Anne, who is literally, a mannequin (voiced by Carey Mulligan). An enraged Cynthia vows revenge and a showdown is imminent. Business booms, Cynthia's diabolical and duplicitous son Winston (Haley Joel Osment) takes over management of the Morehouse Conglomeration and the potboiling melodramatics boil over into an explosive conclusion.

Will Ferrell
as Eric Jonrosh

Val Kilmer
as General
View All

Critic Reviews for The Spoils of Babylon: Season 1

The Spoils of Babylon is both a loving and completely silly send-up of a certain sort of dead-serious period piece, full of bad acting, over-the-top twists, and a swelling score.

The good parts of Spoils of Babylon are funny enough that you almost feel churlish saying the jokes stretch a couple of absurdities too far.

The first two episodes prove as tiresomely pleased-with- themselves as my run-on sentences.

If these guys are having so much fun mocking TV's past - and they genuinely seem to be - how can we not merrily go along for the ride?

Now the genre is low-hanging comedy fruit, ready for picking and juicing into silliness, as Spoils so aptly demonstrates.

The Spoils Of Babylon isn't a drama, and isn't even must-see - but it's fun.

Many of the gags (which tend to wear thin quickly) derive from the ridiculously cheesy production design, which includes toy cars and obvious miniature houses, horrendous special effects and phony backdrops for action or outdoor scenes.

Spoils targets the more niche miniseries and does so with a meta flair that will be most appreciated by avid media consumers.

There's plenty of funny in the miniseries' script... And the various sight gags, from cheap miniature sets to Hot Wheels-like toy cars to Halloween-worthy wigs and costumes, had me laughing out loud.

In other words, Babylon is asinine - it's supposed to be - and from time to time hilarious.

Audience Reviews for The Spoils of Babylon: Season 1

It started out slow, but so far the first and second episode have been the funniest so far. The problem with this show is that it's focusing more on the story than the jokes. The story should just be a frame to hang the jokes on. The beginning and ending with Will Ferrel as Eric Jonrosh is absolute gold. The rest wavers between fantastic satire to "when is it going to do something funny" territory. It reminds me of Casa De Mi Padre. This is despite Casa De Mi Padre being much funnier because it was contained in an hour and a half, not a mini-series style like The Spoils of Babylon. It does have an awesome cast though, so there's that.

Discuss The Spoils of Babylon on our TV talk forum!