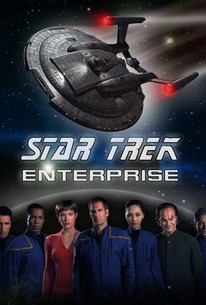 Critics Consensus: While some may find Star Trek: Enterprise a welcome return to a familiar universe, it's equally as likely to repel those uninterested in mining stories from the franchise's past.

Critic Consensus: While some may find Star Trek: Enterprise a welcome return to a familiar universe, it's equally as likely to repel those uninterested in mining stories from the franchise's past.

In the first series of this prequel set 100 years before the original "Star Trek" series, follow the adventures of Captain Jonathan Archer and his crew as they explore unknown parts of the galaxy. Series 1 sees the introduction of the Klingons, the exploration of Earth's first colonization attempt outside the solar system, the infiltration of an enemy into the Enterprise and much more.

Joseph Will
as Rostov

David A. Kimball
as Esaak

Star Trek purists might not be amused, but the captivating [Jolene] Blalock energizes the franchise. Enterprise needs every bit of pizazz she can supply.

Star Trek will be presenting a very passionate series - and captain. As such, it ought to be an ex- tremely successful Enterprise.

Many Season One stories flounder through familiar-feeling alien-encounter and spatial-phenomena plots, but just as many episodes stand out for their creative energy.

The show looks good, the supporting cast is attractive and the characters are interesting, and "Enterprise" really does manage to spin what has become a science-fiction staple over the past 35 years in a new, exciting way.

Maybe it's the diminished expectations or maybe they've actually come up with something decent, but tonight's two-hour "Enterprise" premiere is surprisingly satisfying.

The two-hour series première shows some promise but is strangely ham-fisted.

"Enterprise" has a bargain-basement feel that lands just this side of camp; the space fights aren't much more convincing than PlayStation offerings. And everything is wrapped in a trite message about unity and the importance of getting along.

''Enterprise'' gets back to basics, then improves on them.

Those who never got caught up in the whole "Trek" mystique will find this series approachable and fulfilling, without having to know the dense "Trek" mythology.

Out of all the Star Trek series and films, Enterprise is easily the most overlooked, and was the only one since the original to be cancelled. This isn't because it wasn't as good as the rest, but simply the way it was marketed. The show is in fact a prequel to Kirk's Enterprise, and does take place before the Federation, but what the show lacks in technology, is more than made up for with realism and some of the best character development in the Star Trek franchise. 100 years after Zefren Cochrane's warp flight, the human race has had enough of Vulcans holding them back, and have created the first warp five star ship in human history. Over the Vulcan's objections, Jonathan Archer (Scott Bakula), the son of the engines designer, has been selected to Captain the ship and explore a galaxy that humans know very little about. This show is extremely important to the franchise and all Trekkies, as it not only shows humanities first trip out of our solar system and first contact with all the races we've come to know over the years, but the show fills in a lot of the gaps from all the other series and films! Enterprise explores the origins of Data's creator, the Eugenic Wars (which created Khan), the development of many protocols and much of the tech we see on future ships, but most important of all the series shows how the foundation for the Federation and the creation of star fleet all came together. Enterprise was also unique for it's character development and realism, in that it takes place in the not to distant future. We get to know the crew intimately, from their fears to their families, and we see them doing and discussing things never before seen in Star Trek. The Enterprise crew has a classic movie night, watches sports on TV, has pets, and they even talk about sex. The cast is lead by Scott Bakula, which was another great move by producers. Casting a veteran science fiction actor, whose been in long running series, automatically gives him that air of experience and authority that Picard had. He's also a younger man, so with no federation policies in place yet, Archer can be just as much of a risk taker as Kirk was, even more so. Star Trek Enterprise was extremely enjoyable, and a series people could relate to more than any other in the Star Trek franchise. The show isn't simply about the future and the Federation, it's about what it means to be human and how that compares to other species. It shows what we need to do in order to get along with and understand other cultures, but most of all it fills in so many holes from previous films and episodes, that it truly was the missing link. Unfortunately for Star Trek fans, the show barely made a hundred episodes, because it was on a dying network, that folded shortly after the show was cancelled, screwing us trekkies out of three more seasons. As with all the previous series, the story has been continued in books, but in this case, the books were written by the main writers of the series, and do encompass everything that would have happened in seasons five, six, and seven.

Going where no Trek series has gone before, Enterprise is a daring and edgy science-fiction television show. Set as a prequel to the other Trek series, the show has a few drawbacks, but it's also able to make old things new and put a spin on the familiar aliens and technologies of Star Trek. The series is also able to find a good balance of serial and episodic storytelling in Season 1 by having one-off adventures and an overarching plot involving a Temporal Colds War. However, the character dynamics are a bit hit and miss, though the Archer and T'Pol relationship is quite compelling. Season 1 of Enterprise provides a thrilling and adventurous journey into an uncharted part of the Star Trek Universe for both new viewers and dedicated fans alike.