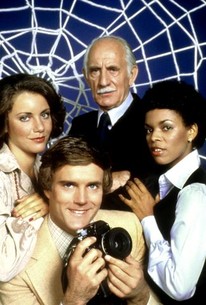 Critics Consensus: From the low production quality to the depiction of Peter Parker's abilities, The Amazing Spider-Man offers disappointment for viewers and comic book fans alike.

Critic Consensus: From the low production quality to the depiction of Peter Parker's abilities, The Amazing Spider-Man offers disappointment for viewers and comic book fans alike.

Live-action version of the Marvel Comics book about a young man endowed with spiderlike powers after he's bitten by a radioactive arachnid. Often uncomfortable with the mantle of hero, Peter Parker nevertheless swings into action as Spider-Man when the need arises. Sincerity aside, the series will seem crude to anyone weaned on Tobey Maguire's cinema Spidey.

Supergirl Is the Strongest Superhero on TV (We Did the Math)

It's never a good idea to use rope as a substitute for webbing-- just don't do it.

Besides Spidey's goofy costume and oversized web-shooters that looked like Wonder Woman's bracelets, there's the fact that the series was a huge mess.

This series... [had] hokey sets and laughable production quality.

The series was never really considered a success due to the lack of any "real" supervillains.

As much as [Nicholas Hammond] tried, Olympic gymnast he was not, and the effects department wasn't up to the challenge of capturing the character's agility.

Fans at the time bayed for its blood, largely because of the absence of any comic book storylines or supervillains.

Hammond's performance is delightfully straight-laced as Parker, but he plays him as slightly too nebbish, with not enough of the cool banter Spidey employs when he's in the mask.

Nicholas Hammond's excellent Peter Parker deserves more recognition in the pantheon of superhero performances... Most importantly, there are the incredible stunts.

Spider-Man has one of the greatest rogue galleries in Marvel, so for none of his infamous rivals to make their way onto the TV program feels like a major missed opportunity.

Fans were critical... [but] The Amazing Spider-Man did at least make a fair attempt at depicting Parker's fantastic wall-crawling abilities, in an age before CGI provided an easy out.

There are no featured audience reviews yet. Click the link below to see what others say about The Amazing Spider-Man: Season 1!

Discuss The Amazing Spider-Man on our TV talk forum!