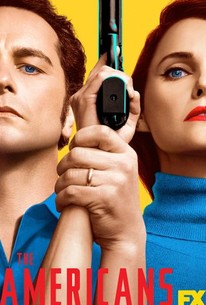 Critics Consensus: In its penultimate season, The Americans brings long-simmering storylines to a boil while heightening the spy-thriller stakes and deepening the domestic drama -- all brought vividly to life by superb performances from its veteran cast.

Critic Consensus: In its penultimate season, The Americans brings long-simmering storylines to a boil while heightening the spy-thriller stakes and deepening the domestic drama -- all brought vividly to life by superb performances from its veteran cast.

The Jennings teenage daughter Paige (Holly Taylor) spends Season 5 of "The Americans" trying to find out more about the family business now that she knows her parents aren't mild-mannered travel agents, but Russian spies. As she helps protect them (or is she?) by collecting intel on Pastor Tim (Kelly AuCoin) and his wife Alice (Suzy Jane Hunt), she grows closer to her mom Elizabeth (Keri Russell), who is teaching her self-defense. Meanwhile, Elizabeth and Philip (Matthew Rhys) investigate an American plot to create famine in the Soviet Union, and Elizabeth comes to terms with a difficult decision after a mission goes awry. Elsewhere, Oleg (Costa Ronin) struggles with his loyalty to the KGB; and as the FBI continue to seek out the Soviet agents, Stan (Noah Emmerich) struggles with the loss of Nina (Annet Mahendru) and the consequences of his choices.

Lev Gorn
as Arkady
View All

News & Interviews for The Americans: Season 5

View All The Americans: Season 5 News

Critic Reviews for The Americans: Season 5

There's more TV to watch than ever before, but fewer shows that feel like they earn that capital-G Great title. The Americans is a Great Show. In fact, it is the greatest currently on television.

Well, I have been watching - and it's been fascinating from the start. But now, with Cold War intrigue hotter than it's been in decades, many curious new viewers are likely to flock to this series.

The Americans otherwise remains in the top tier of TV dramas, even if the first three episodes of the 13-episode new season could use a kick in the pants pacing-wise.

The fourth season was great. The fifth at least needs to match it, and the evidence so far establishes that it will.

This season, the conditions in Russia seem to be taking a more forward position on the show. Cleverly, the writers introduce a Russian family in America whose father despises Russia and is glad to be out.

How The Americans balances big, worldly topics with intimate, familial stories has always been skillfully implemented. But now such moments are even more pointed.

A masterpiece of tension, political intrigue, complex plots, and wigs...

It sets everything up for the brilliance of the final season, which contain some of the finest writing, acting and suspense in the history of television.

It would be easy to say that the spies of The Americans traffic in information, but it would be more accurate to say they specialize in leveraging emotions against uncertainty.

Through this dedication to storytelling and stellar performances, that show will continue to be a much watch show.

Audience Reviews for The Americans: Season 5

There are no featured audience reviews yet. Click the link below to see what others say about The Americans: Season 5!

Discuss The Americans on our TV talk forum!