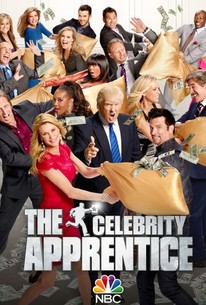 Eighteen celebrities, two teams and one prize: a large donation to the winner's chosen charity. Season 12 of the reality series sees the return of Donald Trump as host and main judge, while the contestants are divided in two gender-based teams. The man's team (dubbed Unanimous) includes Arsenio Hall, Clay Aiken and Lou Ferrigno, while the women's team (named Forte) has on it Debbie Gibson, Tia Carrere and Cheryl Tiegs, among others. Tensions are high as the contestants try to prove themselves worthy of the judges' approval while selling sandwiches, producing live shows, and creating viral videos. James Lipton and previous contestants Marlee Matlin and John Rich make appearances as guest judges.

How Much Is That Celebrity in the Window? Winning by a Nose Blown Away

Critic Reviews for The Apprentice: Season 12 (The Celebrity Apprentice)

I'm convinced this is a great cast, though, so I'm willing to forgive a weak episode.

Audience Reviews for The Apprentice: Season 12 (The Celebrity Apprentice)

There are no featured audience reviews yet. Click the link below to see what others say about The Apprentice: Season 12 (The Celebrity Apprentice)!