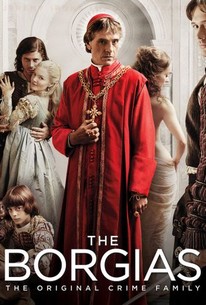 Critics Consensus: It's deliberately paced and its characters might be too unpleasant for some, but The Borgias is a lush period drama with high production values and intrigue to spare.

Critic Consensus: It's deliberately paced and its characters might be too unpleasant for some, but The Borgias is a lush period drama with high production values and intrigue to spare.

Toss in some Corleones with your Sopranos and you've got the makings of this sumptuous Renaissance-era soap opera-costume drama. Don Borgia, er, Rodrigo Borgia, played with devilish ham by Jeremy Irons, makes like Machiavelli (who, incidentally, shows up a few episodes down the Appian Way) and maneuvers and schemes his way to the papacy to become Pope Alexander VI. And he keeps things in the family, by naming son Cesare (François Arnaud) a cardinal, putting another, Juan (David Oakes), in charge of the papal armies and pimping out daughter Lucrezia (Holliday Grainger) for a political alliance.

The Poisoned Chalice The Assassin The Moor Lucrezia's Wedding The Borgias in Love The French King Death, on a Pale Horse The Art of War Nessuno (Nobody)

Critic Reviews for The Borgias: Season 1

As deadly as the Borgias were in life, this enthralling miniseries makes them immense fun to watch.

Irons is a great actor who is aware that sometimes a project calls for great bad acting, and he not only chews the scenery in The Borgias, he savors it.

Has all the surface requirements you'd expect from a prestige production. Now all it needs is a beating heart.

Almost swashbuckling with a cast of thousands, costumes off the charts, and enough murder, sex, and mayhem to suit . . . well, the Borgias.

At the center of Showtime's rich new romp about bad-boy Renaissance pope Alexander VI and his immensely corrupt circle, [Jeremy Irons] is dry as ashes and wickedly funny.

The name alone conjures up images of depravity and debauchery. So why is "The Borgias" so dreary?

Neil Jordan puts a lot of focus on the story without doing so at the expense of the period setting and wardrobe, which ought to easily satiate the costume drama enthusiasts frill fix. It is truly a gripping opening.

Audience Reviews for The Borgias: Season 1

There are no featured audience reviews yet. Click the link below to see what others say about The Borgias: Season 1!

Discuss The Borgias on our TV talk forum!