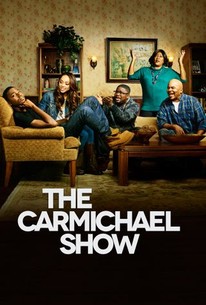 Critics Consensus: The fitfully funny Carmichael Show earns points for its attempts at topical humor -- even if they're often trapped in dated sitcom tropes.

Critic Consensus: The fitfully funny Carmichael Show earns points for its attempts at topical humor -- even if they're often trapped in dated sitcom tropes.

In Season 1 of "The Carmichael Show," Jerrod (Jerrod Carmichael) struggles to tell his parents he has moved in with Maxine (Amber Stevens West), his therapist-in-training girlfriend. Meanwhile, Cynthia (Loretta Devine) and Joe (David Alan Grier) refuse to change their ways despite a worrying trip to the hospital; and Maxine confronts Joe when she discovers he gave Jerrod a gun. Elsewhere, Jerrod's birthday is put on hold as Cynthia and Maxine join a Black Lives Matter protest. And when Jerrod volunteers for the Big Brother program, he finds himself unsettled by the words of his ward.

Jerrod Carmichael
as Himself

One hesitates to criticize the in-your-face comedy of the new sitcom The Carmichael Show when NBC has graciously scheduled it so that the smallest possible audience will watch it. Still, the show is mediocre.

This is one crazy-paced show, and one smartly crafted comedy.

It all makes for a pleasant surprise.

Carmichael manages to take hackneyed situations and turn them into something unexpected and fresh.

For all there is to like about Carmichael, that added bit of substance, at least out of the box, feels elusive.

Carmichael is fearless in his material (the writing on the show is shared with co-creator Nicholas Stoller and others) and loves to cast a skeptical eye on conventional wisdom.

The Carmichael Show is almost weird enough to work... almost.

The Carmichael Show reminds me that certain formats still work if executed properly. Its visual simplicity can be disarming at first, but if you pull back the curtain you'll enjoy how it tackles varying degrees of controversial targets.

Rather than simply explore racial identity and tension, it's wading deep into the racial-and political and religious-conflicts that characterize our era.

The heavily topical show was the closest thing TV had to a classic Normal Lear sitcom in years, with every episode finding comedy in a hot button issue.

There are no featured audience reviews yet. Click the link below to see what others say about The Carmichael Show: Season 1!

Discuss The Carmichael Show on our TV talk forum!