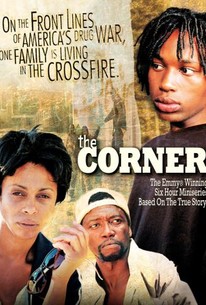 Critics Consensus: Powerfully performed and authentically written, The Corner is an unwavering depiction of life under the thumb of addiction and poverty.

Critic Consensus: Powerfully performed and authentically written, The Corner is an unwavering depiction of life under the thumb of addiction and poverty.

A tough Emmy-winning series about a drug-infested neighborhood in 1990s Baltimore and the broken, battered families who struggle every day to survive. Brilliantly acted, written and directed (by Charles S. Dutton), this visceral and unflinching drama was based on the nonfiction book `The Corner: A Year in the Life of an Inner-City Neighborhood,' by David Simon and Edward Burns, a former crime reporter and an ex-cop.

Bobby Brown
as Off. Weiner

Cleo Reginald Pizana
as Off. Stormin'
View All

Critic Reviews for The Corner: Miniseries

It's a very small part of the story Simon and Burns would tell with The Wire, but just as effective in its own way.

Relentlessly intense and depressing, ferociously written and spectacularly acted, The Corner looks at the American drug problem from street level.

It is a jarring introduction to the people behind the statistics and the cliches. I hope it finds an audience, despite its rawness. No one ever said great drama had to be pretty.

The Corner is daring television, a show only HBO, which isn't a slave to advertising and ratings, would attempt. Each episode is riveting in its intensity.

Let "The Corner" into your living room, and it just might change the way you see the world.

It shows them shooting, snorting, peddling, thieving and lying on a day-today basis. And it says: Do not turn away, these are human beings.

Best known as an actor, Charles S. Dutton is intimately familiar with these streets... and as director he shines a fierce and uncompromising eye on both the nightmare they are and the optimism their residents struggle to sustain.

It's a small slice of the story the same team would go on to tell in The Wire, but one that's every bit as engaging as the critically adored series.

This is no splashy Sopranos but a sober and harshly realistic tone poem - slices of ghetto life that have been cut with a very sharp-edged knife. And yet the approach, mercifully, is neither preachy nor simplistic.

T.K. Carter and Khandi Alexander are revelations as a middle-class couple brought low by, and struggling to rise above, their drug habit.

Audience Reviews for The Corner: Miniseries

There are no featured audience reviews yet. Click the link below to see what others say about The Corner: Miniseries!

Discuss The Corner on our TV talk forum!