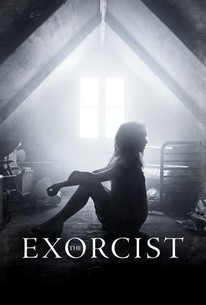 The horror series is based on the novel of the same name written by Peter Blatty and is a sequel to the movie "The Exorcist." Season 1 features the Rance family, which includes Henry (Alan Ruck), who's recovering from a serious injury, his wife Angela (Geena Davis), who believes there's a demonic presence in their house, and their daughters Katherine (Brianne Howey), who doesn't want to leave her room, and Casey (Hannah Kasulka), who thinks something lives within the walls. Helping the Rances with their possibly supernatural problem are Father Tomas Ortega (Alfonso Herrera), a progressive Catholic priest who runs a small parish in the outskirts of Chicago, and Father Marcus Keane (Ben Daniels), a brash priest from Mexico City who was trained to battle evil since he was a child.

David Hewlett
as voice of the demon

News & Interviews for The Exorcist: Season 1

View All The Exorcist: Season 1 News

Critic Reviews for The Exorcist: Season 1

Maybe someday there'll be a place on television for a show about religion helping people to cope with the everyday horrors that can strike at any time, but that show obviously can't be The Exorcist.

Evil still lurks in the hearts of children in The Exorcist, a reboot of the classic film that benefits from a sharp cast, including Geena Davis, and a chill that will make even horror veterans reach for an extra blanket.

The pilot holds some promise, and then watching children act like profane, satanic monsters is almost always unsettling, even when network standards don't permit certain words.

With expectations low, this Exorcist surprises with appealing leads, and - a big bonus point - the return to TV of Geena Davis.

Judged by its pilot, The Exorcist looks to ground its demonic-possession drama in somber realism and gotta-see-what-happens plot twists. But if you've seen one exorcism, apparently you've seen 'em all.

If it can find a way for this slow-burn opening to pay off with big-time frights down the line, perhaps Fox can actually realize the impossible.

A series inspired by the original film did not sound like a great idea, but the end result has been quite dignified. [Full Review in Spanish]

Father Tomas had a dream about the whole exorcism and witnessed it as it went on as if he was in the room. It was some Inception s**t!

There are some genuinely creepy moments here, and the strength of the cast may eventually lead to some really quality horror.

If the quality of the story and the special effects is maintained throughout, we should be in for a very thrilling ride.

Audience Reviews for The Exorcist: Season 1

Discuss The Exorcist on our TV talk forum!