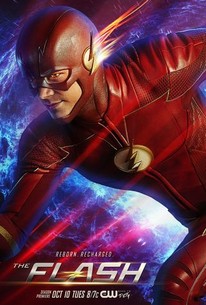 Critics Consensus: After an unsteady turn in season three, The Flash returns to its roots with a fourth season packed with humor, spectacle, and a whole lot of heart.

Critic Consensus: After an unsteady turn in season three, The Flash returns to its roots with a fourth season packed with humor, spectacle, and a whole lot of heart.

With Barry/The Flash (Grant Gustin) voluntarily committing himself to imprisonment in the Speed Force, Iris (Candice Patton) forcefully leads a discouraged Team Flash in protecting Central City. However, a new villain emerges and threatens to destroy the city if the Flash doesn't come out to fight him. Against Iris' wishes, the team brings Barry out of imprisonment, though Barry seems incapacitated by his stay in the Speed Force. Later, the team realizes that by getting Barry out of prison, they played right into the hands of their new enemy, the Thinker (Neil Sandilands). Season 4 of "The Flash" also stars Carlos Valdes as Cisco Ramon, Danielle Panabaker as Caitlin Snow, Jesse L. Martin as Joe West, Keiynan Lonsdale as Wally West, and Tom Cavanagh as Harrison Wells. Danielle Nicolet, Jessica Camacho, Hartley Sawyer, and Katee Sackhoff make recurring appearances as Cecile Horton, Gypsy, Ralph Dibny, and Amunet Black respectively.

Neil Sandilands
as The Thinker

Kim Engelbrecht
as The Mechanic

News & Interviews for The Flash: Season 4

View All The Flash: Season 4 News

The Flash Reborn Mixed Signals Luck Be a Lady Elongated Journey Into Night Girls Night Out When Harry Met Harry... Therefore I Am Crisis on Earth-X, Part 3 Don't Run The Trial of The Flash

Critic Reviews for The Flash: Season 4

The overall storyline plays out well over the 23 episodes, and most of the characters get something to do. A good return to form for The Flash.

A solid season but it's disappointing to see some of the supporting players sidelined here.

Enriched with its compelling characters and intricate storytelling, the show remains a shining example of how superheroes on the small screen can easily compete with, and in many cases surpass, their big screen counterparts in terms of quality.

There's a lot that doesn't make sense. Like, a whole lot.

Perhaps I'm the only one who feels this way, but the decision to dispense with the meat of the story to skip to the end seems pretty familiar, no?

The Flash Season 4 episode 16, 'Run Iris, Run,' is one of the most exciting moments in series history.

The episode sets up the rest of the season, and reminds us just what we loved about The Flash before season three went sideways.

There's every reason to hope The Flash has returned from hiatus creatively recharged and ready to deliver on the promise of a lighter, more fun-filled season.

It's hard to dislike Grant Gustin, who has such a natural charisma, but the show surely tried. Now, it's letting him have fun again with inventive speedster sequences, new ways of battling foes, as well as familiar interactions among the team.

Barry Is Back, and Better Than Ever...?

Audience Reviews for The Flash: Season 4

There are no featured audience reviews yet. Click the link below to see what others say about The Flash: Season 4!

Discuss The Flash on our TV talk forum!