Home > The Night Of > Miniseries 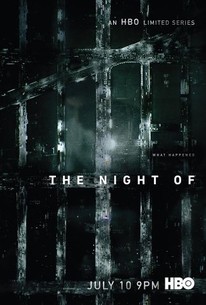 Critics Consensus: The Night Of is a richly crafted, exquisitely performed mystery that will keep viewers enthralled and leave them devastated.

Critic Consensus: The Night Of is a richly crafted, exquisitely performed mystery that will keep viewers enthralled and leave them devastated.

The Night Of: Miniseries Videos

The Night Of: Miniseries Photos

The crime-drama series delves deeply into the intricate story of a murder case, its investigation and the subsequent trial. Naz (Riz Ahmed) is a college student living in New York who, after a night of sex and drugs, wakes up next to a dead woman with no recollection of what happened. The police later find the murder weapon in his pocket, so he is arrested and sent to Rikers Island. The rest of the first season follows several plot lines all linked to the murder case: Naz's life in prison isn't easy, but he gains the friendship and protection of an influential inmate, Freddy (Michael Kenneth Williams); John Stone (John Turturro) is appointed as Naz's lawyer, and he encounters several roadblocks in his pursuit of the truth; Detective Box (Bill Camp) is in charge of the investigation, and soon finds out that the case is not as open-and-shut as he thought.

Carter Hudson
as Attorney in Line

Will Cobbs
as Holding Cell Inmate

Joe Egender
as Cutty
View All

Part 1: The Beach Part 2: Subtle Beast Part 3: A Dark Crate Part 4: The Art of War Part 5: The Season of the Witch Part 6: Samson and Delilah Part 7: Ordinary Death Part 8: The Call of the Wild

Critic Reviews for The Night Of: Miniseries

A show like this one is so busy saying something about the justice system and the prison-industrial complex that it rarely has a moment to consider that one of the injustices here is that a person was killed.

Forgive the misdemeanors and focus on the knowing minutiae and stellar performances, both of which are enough to make "Night" another must-see program.

Familiarity doesn't make The Night Of any less involving, though, in large part because of Ahmed's charismatic and sympathetic performance as Naz.

A gripping collision of race, religion, justice, incarceration and violence wrapped into a modern-day murder mystery, The Night Of may be the best limited series HBO has pulled off since the first season of True Detective.

This is HBO's best "limited series" since Angels in America, which in 2004 won all of the major Emmy awards in its category.

That's the brilliance of The Night Of; not that it invites us inside a jail cell, but that it dares us to lock the door.

It is beautifully shot, written with a sensitive eye, and is likely to please those looking to invest time in a crime-drama that is satisfyingly gripping right until its ambiguous ending.

A captivating series that will have you hooked within minutes.

It reveals itself as a story about the difficulty -- and the danger -- of being sure... The Night of is so keen to reject the grammar of the whodunnit that it sets itself at an ironic distance from fiction.

The Night Of didn't invent anthologies, but it's fair to credit its success with helping propel the form to its current heights.

Audience Reviews for The Night Of: Miniseries

Discuss The Night Of on our TV talk forum!