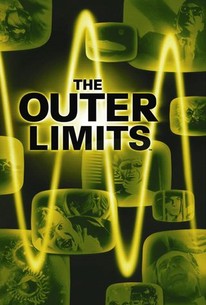 Critics Consensus: Not content to settle for Twilight Zone knockoff status, The Outer Limits set the bar for gruesome monster anthology series and stands the test of time.

Critic Consensus: Not content to settle for Twilight Zone knockoff status, The Outer Limits set the bar for gruesome monster anthology series and stands the test of time.

We are controlling transmission. ...' An eerie, fondly remembered sci-fi series that depicts paranormal paranoia with clever scripts and good (for its time) special effects. The series also benefited from an impressive roster of guest actors, including Martin Landau, Martin Sheen, Bruce Dern, Cliff Robertson, Carroll O'Connor and William Shatner (as an astronaut on a mission presciently called Project Vulcan). A cult hit in syndication, it was revived in 1995 on Showtime.

The fact that it only lasted two seasons doesn't negate the importance, influence or enduring popularity of this crackerjack anthology series.

Screenwriting is a strong point of the series, and many of the episodes display a philosophical streak that more than makes up for what they lack in terms of convincing special effects.

After Rod Serling's original The Twilight Zone became a hit on CBS, it didn't take long for other TV sci-fi anthology shows to pop up on television. The Outer Limits was one of the best.

Not all of the Limits episodes have aged well; the best -- and [The Zanti Misfits] is among them -- are those that mix a little moralizing into their sci-fi. Good stuff.

The result is a B-movie-inspired anthology series that looks like a European art film -- one that's aged surprisingly well.

The Outer Limits set the bar in many ways, and set it high.

Three of the season's best episodes -- "O.B.I.T.," "Nightmare," and "The Guests" -- are merciless classics of the sci-fi and horror genres, metaphorically examining our surveillance and torture states in their infancy.

Nearly all of the best episodes were from the show's far superior first season.

Don't pass up a chance to see "Demon With a Glass Hand," the best episode of the black-and-white series, which ran for two seasons starting in 1963 and boasted top writers, directors and actors of the time.

There are no featured audience reviews yet. Click the link below to see what others say about The Outer Limits (1963): Season 1!