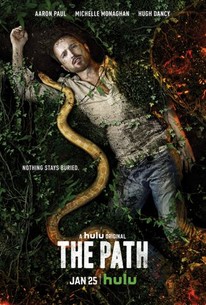 Critics Consensus: The Path struggles with occasionally logy pacing in its second season, but an expanded canvas and heightened stakes -- along with overall solid performances -- make the end results worth watching.

Critic Consensus: The Path struggles with occasionally logy pacing in its second season, but an expanded canvas and heightened stakes -- along with overall solid performances -- make the end results worth watching.

In its second season, The Path follows the Meyerist Movement as it tries to make sense of Dr. Meyer's mysterious departure. Tormented by strange visions, Eddie struggles with a new life while Sarah, despite her skepticism of Cal, now stands beside him as Co-Guardian of the Light. When Sarah finally learns of Cal's dark past, she buries the truth for the betterment of the Movement. Cal and Sarah, now closer than ever, strive to atone for their misdeeds while Eddie, confronted with the meaning of his visions, discovers the truth of Dr. Meyer's departure.

News & Interviews for The Path: Season 2

View All The Path: Season 2 News

Critic Reviews for The Path: Season 2

The lessons are harsh and delivered with greater conviction. Guided by strong performances all around, each character feels like they're living on the edge of a revelation.

In its sophomore slump, The Path seems to have forgotten why it wanted us to believe in it in the first place.

"The Path" can be maddeningly slow at times, but it's those sublime moments of uncertainty that make it unlike anything else on television right now.

There's a lot that's good about The Path, but you have to chop through an underbrush of tedium to remain on its trail.

The Path contains ace performances from its three leads, and Season 2 works hard to expand the story up and out of the compound as Eddie attempts to live a post-cult life.

The Path season 2 manages to take an already strong series and imbue it with a more confident swagger as it takes larger swings and risks, the bulk of which all pay off.

All told, The Path is an engaging way to spend your spare time, but you're not likely to make like the cult members and reorganize your life around it.

By turns darkly intense and ponderous, The Path boasts a stellar cast that in season 2 is given more to do now that the characters and their roles have been better established.

But what was always good about The Path is better than ever in season two.

The show's second season places the focus on religion and adds shades to its once black-and-white struggle.

Audience Reviews for The Path: Season 2

There are no featured audience reviews yet. Click the link below to see what others say about The Path: Season 2!

Discuss The Path on our TV talk forum!