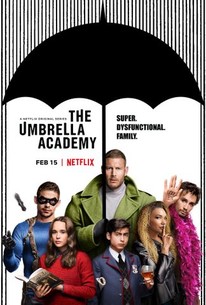 Critics Consensus: The Umbrella Academy unfurls an imaginative yarn with furtive emotion and an exceptionally compelling ensemble, but the series' dour sensibility often clashes with its splashy genre trappings.

Critic Consensus: The Umbrella Academy unfurls an imaginative yarn with furtive emotion and an exceptionally compelling ensemble, but the series' dour sensibility often clashes with its splashy genre trappings.

Oddball billionaire Sir Reginald Hargreeves (Colm Feore) dies of a heart attack. His death brings together for the first time in years his adopted children: Number One/Luther (Tom Hopper), Number Two/Diego (David Castaneda), Number Three/Allison (Emmy Raver-Lampman), Number Four/Klaus (Robert Sheehan), and Number Seven/Vanya (Ellen Page). These children (except Vanya) were superheroes collectively known in their childhood as The Umbrella Academy. However, family tragedies and their dysfunctional upbringing forces these children to leave the Academy upon reaching adulthood. On the day of Sir Reginald's funeral, the missing Number Five (Aidan Gallagher) reemerges from the future as a harbinger of an upcoming apocalypse and convinces his siblings to help him stop it. "The Umbrella Academy" cast includes Justin H. Min as Number Six/Ben, Jordan Claire Robbins as Grace Hargreeves, Adam Godley as Pogo, Cameron Britton as Hazel, Mary J. Blige as Cha-Cha, and Kate Walsh as The Handler.

"The Umbrella Academy" is worth the enrollment. As creator Way once sang, welcome to the black parade.

"Umbrella" looks, feels and sounds different - music does much of the heavy lifting, and effectively so. It's a gorgeous-looking production that evokes another world, with both feet still firmly planted in this one.

It has flaws and excesses, but the series...nonetheless lands in the sweet spot between comedy and drama, and between a plot-and-action-driven narrative and character exploration.

The result is a season of television that seems at once overstuffed and thinned out - long on character and events, but short on any sense of mounting tension, urgency or consequences.

It's never as cutting edge or plainly cool as it so desperately wants to be.

Some choices make the 10-episode first season easy to digest - inviting you to shut off your brain and go along for the ride - but too many fail to live up to the show's creative possibilities.

Whether you've been following the comics since day one, or you're looking for something new in the world of superhero adaptations, you can't go wrong with The Umbrella Academy.

Collier Jennings
But Why Tho? A Geek Community

Overall this series will leaves you swept up in its fun and frolics and make you care enough about the characters to worry about their fate.

The Umbrella Academy Season 1 provides us a wacky, yet rebellious view of superheroes. The characters & music is the heartbeat that pumps blood into this Netflix original & adaptation; giving us enough room to invest and anticipate what's to come from these misfits. 4.2/5

Discuss The Umbrella Academy on our TV talk forum!