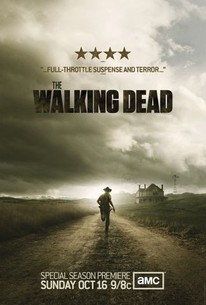 Critics Consensus: The second season of The Walking Dead fleshes out the characters while maintaining the grueling tension and gore that made the show a hit.

Critic Consensus: The second season of The Walking Dead fleshes out the characters while maintaining the grueling tension and gore that made the show a hit.

In series 2, Rick (Andrew Lincoln) and the survivors he's teamed up with continue their search for safety from the walkers. After escaping the explosion at the CDC in Atlanta, the group encounters a threat on the road. Shelter is found at a farm owned by veterinarian Hershel Green (Scott Wilson), the site of most of the season's action, including a tragic incident that tests the bonds of the group.

Keedar Whittle
as Sean
View All

There is so little depth on display that if you replaced every single member of the cast with an animal you'd have essentially the same show. You'd probably have a better one.

I still need convincing that The Walking Dead' is anything more than a hackneyed apocalyptic melodrama with borscht-like guts spilling out all over the place.

Coming out of the starting blocks, at least, the show is still clinging to its complexity, darkness and humor.

Season 2 so far is still a watchable feast of decayed human flesh and frayed nerve endings.

Six million zombiephiles watched the finale of the first season and those 6 million will not want to miss Sunday's opener, which is excellent and appropriately disgusting. The larger concern is the future.

The opener had a feeling of unhurried foreboding that had you shifting uncomfortably in your seat, wondering how the next threat would materialise.

A series in which everybody basically did nothing. Except when they were doing incredibly stupid things in order to drive the plot.

I will say this, there is one hell of a cliffhanger that I didn't see coming.

Dead returns very much alive and kicking, the gut-wrenching highlight of another busy TV weekend.

The last three episodes of season two of The Walking Dead are among the best cable television that's aired so far this year.

It slightly suffers from a slow start, but The Walking Dead Season 2 picks up rapidly with compelling drama & gory action. The formulaic development of characters, old and new, along with the building-intensity makes the second season a success. 4.5/5

I feel the second season was a total step above the first. It pretty much goes from strength to strength. Though it’s true that there may be some duller points, some annoying characters and a lot of rehashing old issues, The Walking Dead manages to use even these negative instances in favour of setting the pace, even if they aren’t a benefit to the series over all. The non-comic characters that AMC chose to introduce became entirely more believable this time around. Though not necessarily likeable, that’s not important. What does matter is that this larger group now seems to have many actual personalities, rather than just a string of one dimensional cliches. Darryl (Norman Reedus - 8MM, The Boondock Saints I & II, Blade II and Pandorum) is still a fantastic character, that everybody (including myself) seems to love despite his being a total dickbag. Lauren Cohan (Death Race 2, Supernatural, The Vampire Diaries and Chuck) is introduced as the character Maggie Greene in this season, and I really like her, too. The relationship she has with Glenn (Steven Yeun) is really the only one in the series to date I could bare. Scott WIlson (The Ninth Configuration, The Exorcist III, Judge Dredd, Behind the Mask: The Rise of Leslie Vernon and Big Stan) as new character Hershel is a great actor, but the role is hit and miss at best. He’s a necessary character to be sure, but it’s hard to say that I actually “like” him. Other than these guys, I could pretty much take or leave the rest of new cast. To be honest, I could probably even deal with losing the rest of the original cast too. That may be too harsh; as I said, they’re all coming together nicely, but it’s really just Darryl and Maggie that I’ve really started to gain an attachment to. Maybe in Season 3 this will change. I’m sure lots of things will. Before giving my final mark, I’d just like to say, that once again The Walking Dead has got some of the best goddamn practical effects I’ve seen in my entire life. If anything, this season’s is somehow even an improvement on the first. Seriously. If you have an interest in media in the broader sense, The Walking Dead is worth watching for that alone. Check it. 78% -Gimly

Discuss The Walking Dead on our TV talk forum!