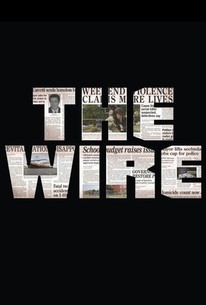 Critics Consensus: The Wire goes out with a suitably resonant bang in its final season, craftily maneuvering venturesome motifs and a colorful cast of characters to skillfully understated conclusion.

Critic Consensus: The Wire goes out with a suitably resonant bang in its final season, craftily maneuvering venturesome motifs and a colorful cast of characters to skillfully understated conclusion.

For the fifth and final series of this urban drama, series creator David Simon returns to his old stomping grounds at the Baltimore Sun, where he worked for many years as a crime reporter, to examine the media's role in modern society. This fictionalized version of what was once a newspaper of record is experiencing tough economic times, precipitating layoffs and a hollow mantra from management to "do more with less." These marching orders are met with derision by Gus Haynes (Clark Johnson), an old-school City Desk editor who encourages eager young journalists such as Alma Gutierrez (Michelle Paress) to hone their craft. The cutbacks at the Sun mirror those at City Hall, where Mayor Carcetti (Aidan Gillen)---who's too busy angling for a gubernatorial run and convicting corrupt politico Clay Davis (Isiah Whitlock Jr.) to care---slashes the police budget to save money. But the decimation of the department's morale and matériel is too much for Jimmy McNulty (Dominic West). The maverick detective, who is not only back in Homicide but regressing to his tomcatting ways, fabricates a grisly crime that catches the eye of self-serving Sun reporter Scott Templeton (Tom McCarthy). And although his sensational articles about a rampaging serial killer are met with skepticism by Haynes, they're championed by his prize-hungry bosses. McNulty's scheme doesn't sit well with his partner Bunk (Wendell Pierce), but is embraced by Det. Freamon (Clarke Peters) if the means justify the restoration of funding to pursue drug lord Marlo Stanfield (Jamie Hector). Free of law-enforcement scrutiny, Marlo shields himself with onetime Barksdale attorney Maurice Levy (Michael Kostroff) on a quest to rule the entire city's drug trade, and tempts fate by luring stickup artist Omar (Michael K. Williams) back to town to settle an old score. Meanwhile, former addict Bubbles (Andre Royo) struggles to stay clean, but finds it hard to face his demons at Narcotics Anonymous meetings.

Amy Ryan
as Off. Beatrice Russell

Benjamin Busch
as Off. Anthony Colicchio

Michael Salconi
as Off. Michael Santangelo

Bill Raymond
as The Greek

William Raymond
as The Greek

Critic Reviews for The Wire: Season 5

The Wire amazes with its gritty attention to detail. It feels so damned real, and from Day One that's been both its blessing and its curse. You don't kick up your feet to watch. Nor do you feel at ease.

The Wire isn't the most accessible series. The show lays out a lot of plot strands, forcing the question: Where are we headed? Stick with it, though, and you'll see a remarkable tapestry.

It's great to once again be in the company of these amazing actors... And it's a pleasure to be treated to amazing writing that doesn't try to simplify things and/or pander.

It's a tale less of crime and punishment than crime and survival... It all adds up to a message that requires a very precise rhythm, in script and performance, and from the first moments of this new season, The Wire is locked in.

I'm praying that [David Simon's] fury at the Sun won't overwhelm his genius for storytelling.

The fifth and final season may be the most overtly farcical, but only because things in this slightly fictionalized Baltimore have become, if you can imagine, worse than ever. When the going gets tough on The Wire, the tough get funny.

[Michael K.] Williams quietly dismantled preconceptions about masculinity and sexuality alike and became a hero and icon both on and off-screen. It's not his only great acting role.

The Wire wasn't afraid to be gentle while laying out a bleaker truth for its viewers, delivering one of the more satisfying finales in television history.

It's far more satisfying than the dismal end to The Sopranos and it is noticeable that there is nothing that would prevent HBO from making another season of The Wire.

The Wire is a programme that demands your full attention but eventually it repays you, and once it begins to weave its spell you'll find yourself, much like several of its characters, totally hooked and desperate for more.

Audience Reviews for The Wire: Season 5

Unfortunately Season 5 is too short to be amazing. Fortunately, we have McNulty doing what he does best and just when we start to relate and understand the newspaper crew, that's when the show ends. It feels a bit short. However, the rest of the storylines conclude as they should, wrapping up everything (or not) as it was supposed to. If you watched this from the start, you know there aren't gonna be many happy endings but the way each character bids their last farewell, stays true to their characters and dynamics with the show.

Discuss The Wire on our TV talk forum!