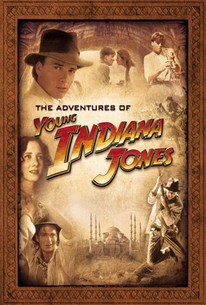 Critics Consensus: The continuing adventures of Young Indiana Jones benefit from a more predominant focus on Sean Patrick Flanery's compelling interpretation of the the budding archeologist.

Critic Consensus: The continuing adventures of Young Indiana Jones benefit from a more predominant focus on Sean Patrick Flanery's compelling interpretation of the the budding archeologist.

The youthful adventures of the `Raiders of the Lost Ark' hero, as recalled by Indy at age 93. `Raiders' producer George Lucas created this clever and entertaining prequel to his movie series, in which young Indy met such figures as Teddy Roosevelt, Picasso, Mata Hari, T.E. Lawrence, Hemingway and Freud. The series never gained a wide audience, but four TV-movies aired on the Family Channel between 1994 and '96. Harrison Ford appeared as the adult Indy in a 1993 episode set in 1920s Chicago.

Lucas' intentions may also be admirable, but in the end, Indiana Jones isn't any better at teaching history than Chewbacca... [But] the personality of Indiana Jones is enough to carry the show along.

The Young Indiana Jones Chronicles remain a hugely underappreciated section of the Indiana Jones lore. Its pure execution of Lucas's vision makes it essential to the franchise.

It holds up well to a modern viewing; mainly because the set pieces, costumes and filming style make for a timeless show, but also because it is supported by an array of good actors and even good-er stories.

It doesn't have much to say about anything, but it's a lot of fun to watch.

Not every episode is a complete winner, but all offer up enough action and historical drama for the curious.

I don't much care for the series. I dislike how the show ties Indiana Jones's childhood with historical events. It limits the number of creative plots.

The episodes are skilfully mounted and display an engaging innocence and exuberance. But what it doesn't really tap into are the reasons why you fell in love with the character in the first place.

For a television show, the scope here is astounding - reaching across the globe and spanning a number of epic, historical action sequences... This is a riveting historical action epic -- good for children and parents alike.

There are no featured audience reviews yet. Click the link below to see what others say about The Young Indiana Jones Chronicles: Season 2!