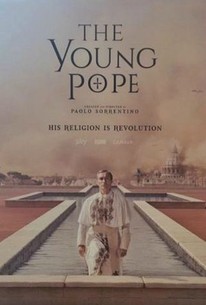 The first season of this limited drama series follows the early years of young, American-born Pius XIII's (Jude Law) pontificate. Pius XIII, who was born Lenny Belardo, quickly demonstrates that he will not be a mere figurehead for the Vatican, as the Vatican Secretary of State, Cardinal Voiello (Silvio Orlando), was hoping for. Instead, Pius XIII is arrogant, self-serving, and power hungry. He publicly criticizes and questions his people's devotion to God, but the people around him begin to wonder if he even believes in God himself. Diane Keaton stars as Sister Mary, an American nun who took in Lenny Belardo when he was a 7-year-old orphan and now acts as his key advisor.

Carolina Carlsson
as Prime Minister of Greenland
View All

The good of the program often outweighs the bad, especially in Jude Law's magnetic lead performance, but it's a show that just misses television transcendence.

What goes on here affects billions of people around the globe, and while the series may feel like a religious fever dream filled with bizarre imagery, slowly we all awaken to the nightmare of truth at its core. The laughs just help us get there.

The Young Pope is a fascinating mess with a puckish sense of humor and an outsized goal - to know the mind of God.

Lush, often surreal, filled with contradictory characters and backstabbing intrigue, The Young Pope is one of the more remarkable television shows in memory.

I'm not exactly charmed by The Young Pope. But I am interested.

It's no big exaggeration to say that The Young Pope runs the full gamut of the life experience of the highest servant of Christ.

Amid The Young Pope's enigmas, Sorrentino has developed a second theme that is far less opaque: a defense of inexplicable, unfashionable moral choices, ones that defy both common sense and church doctrine.

The dreamlike pomp and circumstance amount to one head-scratching hour of television. However, is "The Young Pope" any good?

"The Young Pope" is cinematic art. Costumes and locations are spectacular. The acting is a bit above average, with a particularly good performance from Javier Cámara. However, as storytelling, the series is a profound disappointment. With no grand plan ever revealed other than possibly glacial character development, watching a pope be horrid, arbitrary and unlikable while exercising absolute power, episode after episode, is tedious. I only suffered through all ten episodes hoping that some purpose would be revealed for the pettiness. I was disappointed. One simply cannot care about a character who cares about no one else, who almost no one likes, who abuses his power to demand betrayal, who speaks from hypocrisy, who bullies the kind, who is doctrinaire, and who is in all ways indifferent to anything other than his own cold theology. I would recommend watching a couple of the indistinguishable episodes for the stylishness of it all, but don't feel a need to complete the series -- it never gets any better.

Discuss The Young Pope on our TV talk forum!