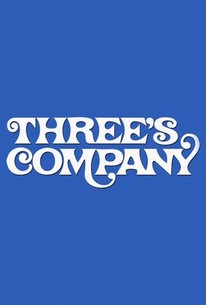 A man shares an apartment with two women and pretends to be gay so the landlord won't kick him out in this popular bedroom farce. Loaded with pratfalls and double entendres, and unapologetically silly, the sitcom was based on the British show `Man About the House.' There were several cast changes, but it was the charm of---and the chemistry among---the three original leads that turned this into a huge success. The roommates' landlords, 'The Ropers,' left for their own show in 1979.

Peter Schuck
as Pete
View All

A Man About the House And Mother Makes Four Roper's Niece No Children, No Dogs Jack the Giant Killer It's Only Money

It's as reasonable a premise for a series as any. But creators Bernie West, Don Nicholl and Michel Ross are not commenting on this sociological trend in a funny or sophisticated way. Half the problem is that I'm not 12 years old anymore.

This new comedy series is best described as cute but worth watching.

The situation is innocent enough, but the comedy isn't. Tuesday night's pilot script was genuinely funny, but most of the laughs derived from sexual innuendo that some viewers will find offensive.

This show is an American adaptation of a British series that was entitled Man About the House. The idea seems to have spoiled some during overseas passage.

Though Three's Company tries desperately to be hip, with-it or, as ABC puts it, "rife with contemporary complications," it succeeds only in being stupid, sniggering and generally tasteless, depending heavily on sex (and sexist) jokes.

The performances are uniformly adequate and the writing, at least in this episode, is topnotch.

As the roommates, John Ritter, Joyce DeWitt and Suzanne Somers are engaging, while Norman Fell and Audra Lindley are excellent foils as the landlords, but the story and jokes will have to get a lot stronger to make this worth watching.

The idea of two young women sharing their apartment with a man sounds like a lot of fun, but, as realized in this new series, it's all terribly coy.

What was good, clean fun in Man About the House turns into innuendo, leer and smut in Three's Company.

There are no featured audience reviews yet. Click the link below to see what others say about Three's Company: Season 1!