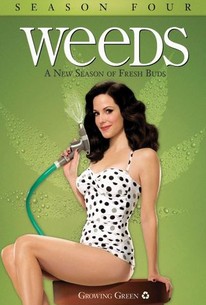 Critics Consensus: Weeds, like its heroine Nancy Botwin, drastically reinvents itself to mixed results in its fourth season, upping the stakes to entertaining effect, but also losing the grounded reality that made its peaks so compelling.

Critic Consensus: Weeds, like its heroine Nancy Botwin, drastically reinvents itself to mixed results in its fourth season, upping the stakes to entertaining effect, but also losing the grounded reality that made its peaks so compelling.

Season 4 of the offbeat comedy-drama picks up where the third ended: Agrestic is burning, as is the Botwin house and evidence of Nancy's illegal activities. But the drug-dealing widow doesn't stay to play the fiddle while her hometown goes up in flames. Instead Nancy (Mary-Louise Parker) packs up her family and heads south to Ren Mar, Cal. (near the Tijuana border), to hide out with her estranged, despised father-in-law Len (Albert Brooks in a four-episode story arc) and his comatose mother. Needless to say, the reunion doesn't go well, since Len never cared for his daughter-in-law and isn't very fond of son Andy (Justin Kirk) either. Nancy wastes no time jumping back in the drug game, but soon learns that selling pot in suburbia and joining a cartel in Mexico are two totally different things. She also falls in love with cartel leader Esteban Reyes (Demián Bichir), who just happens to be Tijuana's mayor. But their romance goes to pot when Nancy discovers even she can't stomach trafficking in guns, cocaine...and young women. Her preoccupations make her already shaky skills as a parent go farther downhill, as Silas (Hunter Parrish) becomes involved with a beautiful neighbor (Julie Bowen), and Shane (Alexander Gould) becomes quite a Lothario among the tween crowd. Meanwhile, Andy and Doug (Kevin Nealon) become partners in a human-smuggling operation. And Celia (Elizabeth Perkins), left holding the (dime) bag for Nancy and facing prison time, strikes a deal with Capt. Till (Jack Stehlin) and turns informant.

Jonathan Rado
as Weiner
View All

Parker still makes Nancy sometimes sympathetic and always fascinating, which is the genius of both her performance and the show.

Weeds's most successful season away from Agrestic... It's funny throughout, and most of the major storylines click.

The show is cleaved down its center, cutting awkwardly back and forth between Celia now imprisoned and Nancy fancy-free.

Creator Jenji Kohan has smartly changed up the story, breathing new life into the series in the process.

With all the key players still in place, I'm hopeful that Weeds can maintain its skewed take on the drug trade in this new, seemingly livelier setting.

As time passes, the series feels increasingly divorced not only from reality but genuine emotions, beyond simply finding wacky new situations in which to throw its players.

It can't be a good sign that you half want Nancy to time-travel back to the '70s and find herself not in California, but in New York, getting slapped with the Rockefeller drug laws.

Weeds is mostly dour and depressing at the start of its fourth season.

The hurried pace of the season premiere is a little disorienting, but the show finds its footing by the next episode.

Season 4 of the beloved Showtime series almost predictably ratchets up the chance taking, but the first three episodes are just as rich and compelling and funny and conflicted as any that have come before it.

There are no featured audience reviews yet. Click the link below to see what others say about Weeds: Season 4!